I finished a new dress recently. I mean to wear it for everyday (yes, it does work, when combined with other tops and cardigans), but it also works nicely for a Hobbit – which was sort of the point. As costumed photos are the most fun I decided to do a Hobbit photo shoot. I asked a friend and her kids over for lunch, cake baking, and some picture taking. 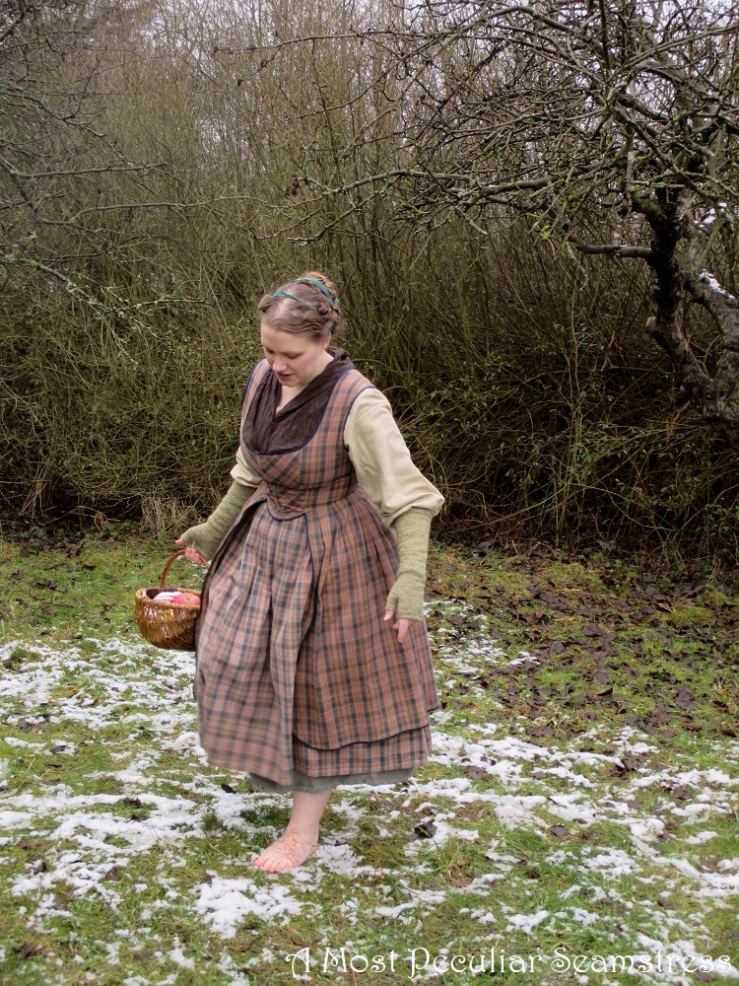 The petticoats have been worn quite a bit on their own since made last spring and summer, and have faded a little in the laundry.

The day before my intended photo shoot the boys and I took a walk in the neighbourhood to find a good spot for it, and in the end a corner of the playground proved to be the best. A few apple trees grow there and the bushes are dense enough to hide any modern things. I doubt that Samwise Gamgee, or any other hobbit with pride in his garden, would let them grow wild in this way though. Taking the pictures in the playground was very convenient, as it made it possible for the children to play while we took pictures.
There was a little bit of frozen snow on the ground in the shadowy places, which was nice, as it made it really look like winter, and not just like autumn. But oh! was it cold for my feet! They were numb by the time I put on woollen stockings and boots. To think that many people through history (and still today) had to go barefoot in the winter is very sobering.

So, the dress. It’s made from the same fabric (an old cotton curtain from a charity shop) as my old hobbit petticoat, also worn in the pictures. When I overdyed the paisley fabric for my 1840’s maternity dress, I tossed in the hobbit petticoat and remaining fabric as well, as I prefer more muted colours. I wanted a vaguely 18th century feel to this dress, but without the need to wear stays under it. The front panels are cut on the bias, for visual interest; in the rest of the bodice I tried to align the plaid nicely. The bodice closes with hooks and eyes in front. I pleated the skirt to make the vertical stripes in the bodice continue down the skirt. The corners of the skirt are softly curved, and all edges but centre front are bound with bias tape. The whole dress is hand stitched, because… well, I like hand sewing. Mind, I will really try to become friends with my sewing machine this year, when my non historical sewing is concerned. It does go much faster.

The tricky thing with making tight fitting clothes after having a baby though is that you loose weight for months and months– even if a bodice fits really tight when first made, it’s soon too large. Breastfeeding also plays tricks with your figure, not only in a longer perspective, but on a daily basis. A bit frustrating, that. As the dress no longer supply enough support, I’ll need supporting underwear instead. I’m working on that, as my whole wardrobe would benefit from it. I contemplated boning the bodice, but as I want this to be comfortable when going about my housework, playing and cuddling with my babies (without having to resort to a historical pattern of movement) I didn’t really like that idea. Ah well, in the pictures I try to look like a simple hobbit woman popping out to the root cellar on a usual workday – maybe she’s just wearing the Shire female version of a grubby, saggy pair of overalls or old sweats? 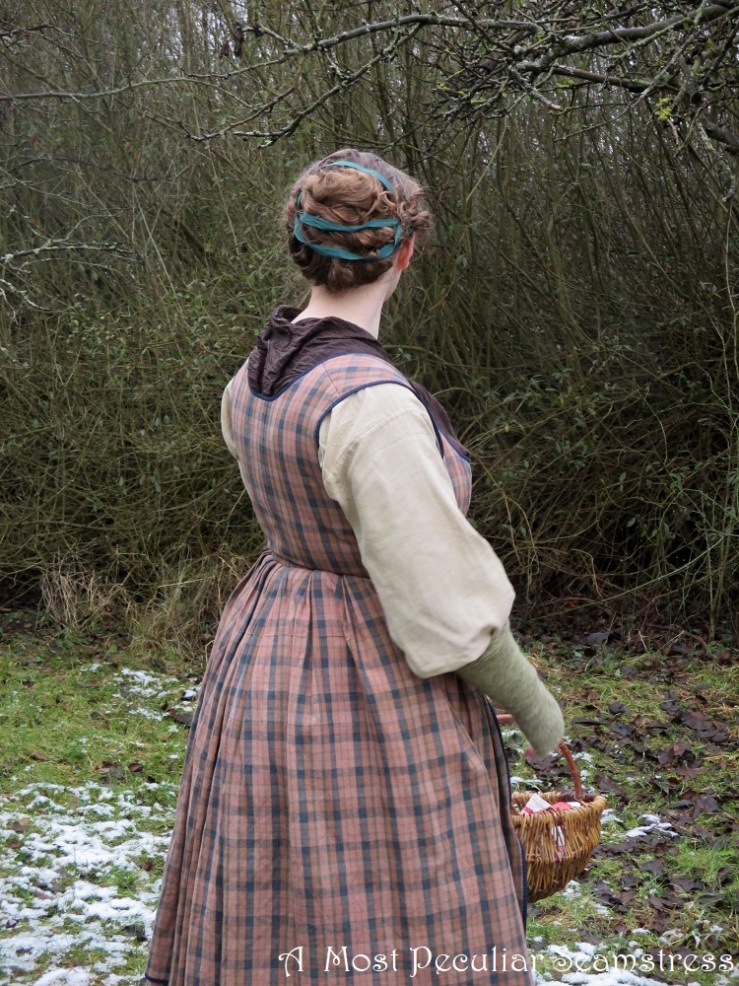 The dress was worn over the shift I made for my first hobbit costume, and the same two petticoats. I filled in the neckline with a piece of brown cotton for a kerchief: the dark colour seems suitable at this time of year, and for doing chores. It doesn’t really show in the pictures, but it’s pinned with a reproduction brass pin. I also wore my knitted wool mitts.
And the hair… I put my hair up in pin curls the day before, and wore a thin scarf tied round my head the whole day, to the great amusement of little B. He’s got a good sense of humour that boy 🙂 I slept on the curls, and didn’t take them out until an hour before the photo shoot, but do you think my hair got curly? No, of course not. What little resemblance to curls there were had soon disappeared, even though I sprayed each curl to an inch of its life as I took it out. So, though this is the kind of volume I wish my hair would normally have, it isn’t exactly hobbity. Meeh. I could have used the hobbit bonnet to hide the hair malfunction, but straw don’t seem quite the thing for winter… A bonnet wouldn’t be required for just fetching apples from storage, so I decided to forgo headwear in spite of the hair. Well, at least it wasn’t straighter than straight, as it usually is – that’s something.

And as a bonus, here’s a picture of a squirrel that was foraging for food in and by the trees at the playground.

He didn’t give any notice to us at all – but then I didn’t reach for a stone.

5 thoughts on “Winter in the Shire”