A while ago I took out an old UFO, and decided to finish it. It is a hand stitched wool bodice lined with linen, fully interlined, and boned in front. It also laces in front over a half boned stomacher. (Meanwhile, that was a good invention – so easy to adjust to size!) The bodice is of good quality, but not quite historical. For other costuming adventures it would be perfectly fine though. As I don’t see myself having much use of it, I mean to sell it. Still, it is nice to have good pictures of the things you’ve made, and I hope that good pictures will make the bodice more desirable for potential buyers. To show that this simple bodice can work for a variety of characters, I’ve had two little photo shoots this week.

The Washerwoman
In Sweden there is a popular LARP series called Krigshjärta (War Heart). It has several different cultures, with very different religions/ideologies, social life, politics, and, of course, dress. Though I’ve never attended a LARP in my life (though I have lots of friends who do so frequently), I have always been a bit intrigued by one of the peoples, the Jorgaler. This people are a highly religious group, who see it as a severe faux pas to outshine what their god has created, and thus dress in a very simple way, keeping trim and decorations to a minimum, almost glorying in what is lowly as it where. Bodices and skirts/dresses are worn by the women, as are some form of kerchief on their heads. Tobias and I considered going to one of the Krigshjärta LARPs and play a couple of Jorgaler when we were newly-weds, but what with pregnancies, babies and life in general, that never happened. I was still interested in composing such an outfit though, to see if I could make plain look pretty. 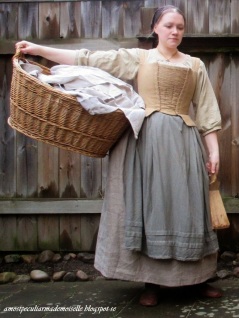 So I had the bodice. The rest I was pretty sure I could dig out from my historical clothing and fantasy costume wardrobes, and my fabric stash. It worked rather well I think. I used the same old hobbit shift, an 18th century linen petticoat, a raw silk skirt for the apron, and a piece of fabric for the kerchief. Medieval wool hose and leather shoes completed the outfit. 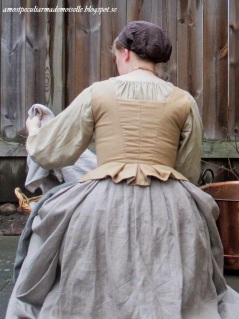 As props I used an old laundry basket that usually holds toys, an even older washing bat, an inherited copper tub, and several historical linen shirts, shifts, braies and aprons. I lugged it all out in the garden and took pictures using the trusty self timer, a dear friend when documenting my costuming adventures. 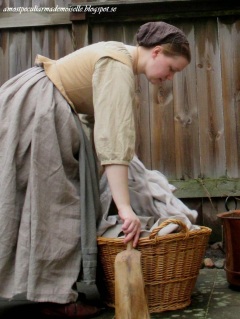 I like how the bodice looks very plain and… almost boring really, when laced with a neutral cord. It doesn’t attract any notice at all worn like this. Actually, I love this outfit! It would have looked better with a wool skirt though, and a larger kerchief.

The Hobbit Larder
I keep exploring different ways to dress hobbit women. I have liked both the styles I’ve tried so far (the bodice/skirt and the dress), but as I have a skirt trimmed with the same fabric this bodice is madefrom, I just had to combine them for a hobbit to wear. My hair actually did get curly this time round – rolling it up on rags for more than 24 hours did the trick. I don’t think I like this hobbit look as much as the others I’ve tried, but it still looks nice. I think it’s the hair – I didn’t manage to get it quite hobbity, even though it was properly curly. It actually looks too frivolous, if that is possible for one of the merry little people. More experimenting is needed! (EDIT: I think I figured it out: the rest of the outfit has a vague 17th century feel to it, but the hair is more 1790’s. A bun in the back and curls framing the sides of the face would have been the very thing here, I think.) 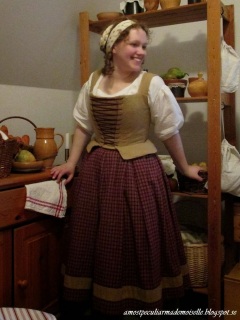 I wore an 18th century-ish shift, two petticoats that are hardly seen, the wool skirt, and some fabric from the stash in my hair. 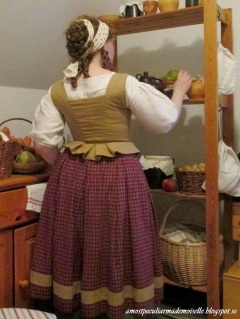 For these pictures I transformed a corner of my sewing room to a larder – a very suitable setting for a hobbit. Good thing we have lots of appropriate bowls, jars, jugs, cups and baskets to use as props… 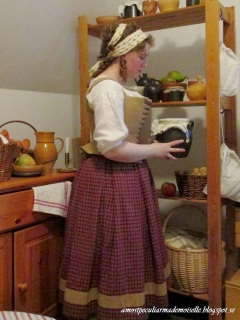 Using a cord that matched the skirt made a really nice look for this outfit; it became a decoration in itself. It also makes the bodice quite versatile – get cords in the same colours as your skirts, and you have a bodice that will match pretty much anything 🙂

Conclusions: colours make a lot of difference; it transformed this simple bodice from being dreary to being delightful.

10 thoughts on “One Bodice, Two Looks”