For a couple of weeks we’ve had snow here (it’s snowing again tonight), and though I know the snow has caused a lot of trouble in the traffic, I’m so pleased. I love the look of snow, and how it adds a little brightness to the dark afternoons and evenings of our northern winters. By four in the afternoon it’s pitch dark here, and where my sister and her family lives, much further north, it hardly gets light at all at this time of year. Hopefully the snow will stay over Christmas. The snow does hinder one to get around with the pram though, so we’ve been home a bit more than usual lately. 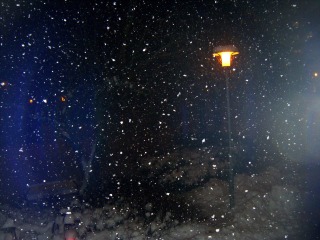 My baby just had his first birthday. How fast this year has passed! It feels like we’ve had him in our family forever. His first teeth finally poked through (so far I’ve not been bitten when nursing…), and he learned to walk for real a week before his birthday. He doesn’t really speak yet, but wants to know what everything is called. I think he’s building up quite a vocabulary for when he will.
I’ve not been idle since last I posted, but I don’t really have anything fun to show for it yet.
I began working on a dress from old curtains in November, but was then interrupted by another, more intriguing, project. My 15 year old sister is going to a Church youth conference after New Years, and one of the dances is themed “Disney”. She asked me for help, and as I was pining away from the lack of fun costumes to make, it really came as a blessing.
I won’t tell what costume I’m making just yet, but will give you a sneak peak. 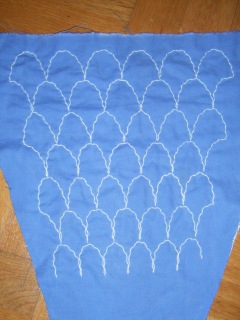 Feel free to guess though 😉