This post is for the benefit of some ladies from the Sewing Academy, as a short answer to how common Scandinavian women dressed in the mid 19th century. This is not all the information there is – I myself have a lot of unanswered questions, but still: here are the pictures I promised. I won’t include pictures of upper and middle class women, as they dressed pretty much the way women of the same social standing in the United States of that time (I did however notice a slightly higher level of women, even young ones, wearing caps in their portraits, than in the States). I only found Swedish and Danish pictures, and they where hard to come by… First the ones with a really local character.

A Danish painting from 1856, by Christen Dalsgaard, called “Mormoner på besøg hos en tømrer på landet”, meaning ”Mormons visiting a carpenter in the country”. As a mormon myself, I think this is an interesting one 🙂 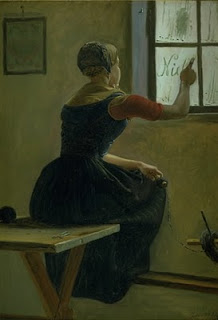 The red sleeves are most likely what is seen of a knitted sweater – similar ones where worn by women in the very south of Sweden, like this, from Torna in the county Skåne (Scania) by J. Kulle, mid 19th century. The painting is called “Söndagsmorgon” – “Sunday morning”. 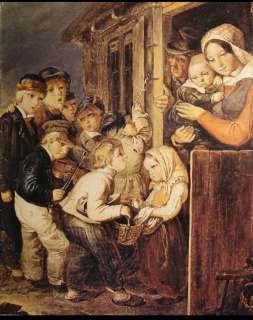 Mind, what we refer to as folk costumes today varied extremely much in existance and apperance with country, location, time, economy, age and personal preference, so these pictures are in no way exclusive! I am also horribly biased – Scania is my county, so I have more pictures from there than from anywhere else in Sweden, and I have more Swedish than Danish pictures for the same reason – sorry about that.

Then we have the ones which are more fashionable: 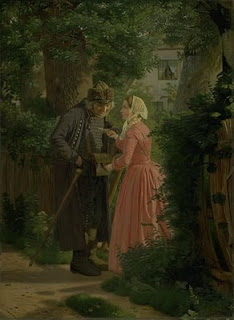 David Monies, Danish, 1850: “Soldatens hjemkomst til Køpenhavn 9 September 1849” – ”The soldier comes home to Copenhagen 9 September 1849”. Notice the cap. She also wears her apron – was that the common practice, or was she just so delighted to welcome her husband that she didn’t take the time to take it of and put her bonnet on? (I feel so sorry for the poor widow in the background who’s husband has not returned….)

And the ones in between:

A Swedish servant, 1860’s. She seems to have a checked dress, with a kerchief round her neck as well as on her head – the one on the head would be the norm for most Swedish women. She also wears an apron.

A.G. Hafström, Sweden, probably late 1860s: “Avskedspredikan för emigranter vid Tullpackhuset” – ”Farewell sermon for emigrants by Tullpackhuset” (in Gothenburg). A lot of kerchiefs and aprons. If that is some kind of outer wear jackets, or in-door basques is difficult to tell… I vote for jackets. 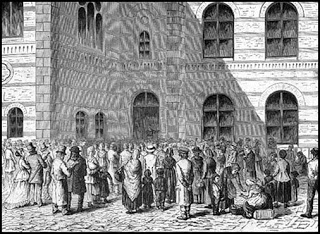 H. Siegumsfelt, Denmark, 1863 – no idea what this painting is called – notice the cap. 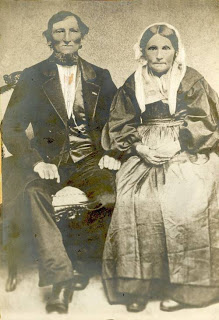 Now, this Swedish countrywoman is thought to have had her picture taken in the 1870’s, but as you can see, her dress have some elements that was in fashion some 20-25 years before. It’s also shorter than what is fashionable, to enable her to work.

This is very typical for Swedish countrywomen at this time – you can even se mutton sleeves from the 1830’s a far in as the 1870’s, as in this picture from Scania:

And here’re a few other pictures from Scania, mixing fashion with local tradition (most of them from the 1860’s/early 70’s): 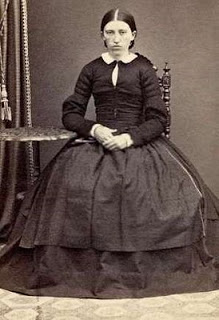 Most women (at the very least the married ones) from the country would have had something on their heads when going out, but not all of them wear them in their portraits. In many areas, hats and bonnets were not for the women of the farming community . Corsets would not have been worn by them either – it would have been considered very vain, and maybe even immoral. Some dresses had boning of cane, to give some support. Multiple petticoats, and maybe quilted petticoats would have supported the skirts. Aprons seams to have been extremely important to these people – you see them in almost all photographs. I’m not sure all of these women are wearing dresses – I think some of them are wearing waist lenght jackets, as an indoor garment.
Also, as we discussed over att the SA, linen was used in underwear, wools in outer clothes – also, dresses with a cotton warp and a wool weft was getting common, kerciefs was made from wool, cotton or silk. Aprons was made from wool and/or cotton, or maybe silk for dressier occasions.
There, I hope you enjoyed what little I have – finding images of “fashionably” dressed farmers wives is not easy. But I think it’s fun, since my own ancestors where farmers and would have dressed somewhat similar 🙂