Here comes the information on the folk costume skirt and apron I promised a week or so ago. Excuse the dust particles, I havent got round to brushing the skirt yet.

The skirt is made from heavily fulled, dark blue (it looks like washed out green in most of the pictures) wool. The facings and pocket are made from unbleached linen. The whole skirt is sewn using unbleached, waxed linen thread. The original was made from four panels of 27” wide fabric. The fabric I used was 60” wide, but wanting it to be as much as the original as possible, I divided it into four lengths, with seams off-centre back and front.

It is tightly pleated in the centre back, similarly to, but not exactly like, cartridge pleating. 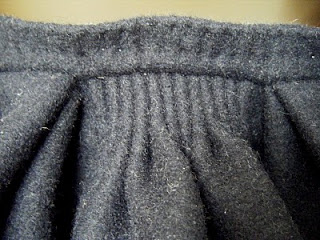 Most of the front is sewn in plain, and the rest of the skirt is pleated with double knife pleats. 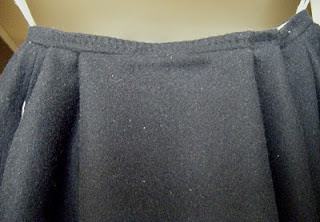 The skirt is sewn to a waistband and opens at the off-centre left seam. It closes with a heavy brass hook and eye, and have a sewn bar protecting the seam from ripping when putting the skirt on and off. The blue colour in this picture is almost the same as the skirts in real life. 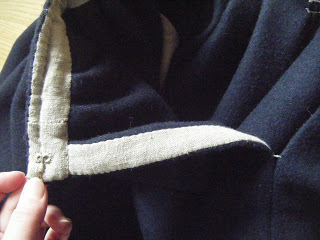 In the off-centre right seam a pocket is sewn in – some originals seam to have had this, which is very convenient. Both the pocket and the opening in the skirt will be hidden by the apron. 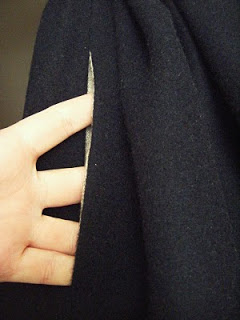 The skirt is long, coming to about 1½ inch from the floor, which is like it should be in my area – in most other parts of the county though, skirts was usually much shorter than this.
Just below knee level there is a 2” tuck in the skirt. When I can find one, I’ll add a silk ribbon with woven in flowers between the tuck and the hem. Problem is, it’s impossible to find real silk ribbons with woven in flowers in Sweden. I found some pretty ones in Norway though, where folk costumes and bunads are much more popular than here; I might order one from there sometime. 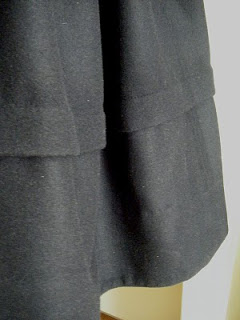 The waistband and skirt opening are faced with linen, as is the hem facing which is 6” wide. All the seams are sewn down to lie flat. I have sewn in one linen loop in each side of the waistband, to hang the skirt on a hanger. 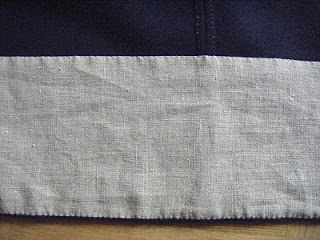 The apron is woven with wool weft on a linen warp. The pattern and dark colours are very typical of the time and place, though lighter ones might have been worn in summer – not many of them being made anymore though. At this time (first half of the 19th century) cotton aprons in the same patterns and colours was appearing, and being thought fancier than the woollen ones. Mine has ribbon ties in cotton, which will wrap around my waist to be tied in front, but a little to the side. I haven’t done any of the weaving myself. As a matter of fact, I bought the apron second hand, so the sewing was already done. It was done, however, in blue polyester thread, and that just won’t do, so I’ll re-sew it this coming week. 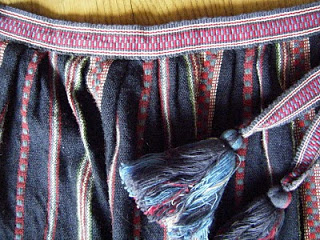 Regrettably, I won’t get the spedetröja finished in time, so I’ll have to use the costume without it on Midsummer’s Eve.

5 thoughts on “Skirt and Apron”