My first ever blog post (nine years ago almost to the day) was about Belle’s blue dress from the animated The Beauty and the Beast from 1991. I made it way back in 2007 and had the pictures in the blog post taken in 2009. Soon after taking them I started on a new version of that dress. 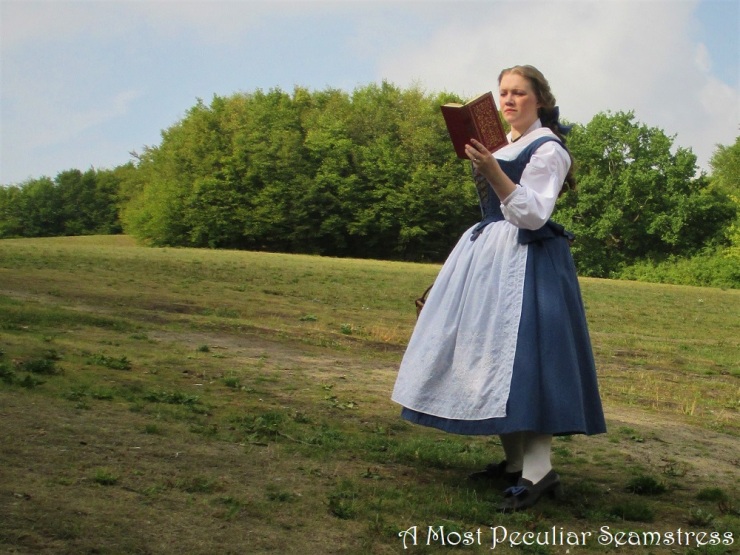 I meant it to be easily recognisable as Belle’s dress, but with more texture and visual interest, something like what I would have designed if I had been involved in a musical production (though not with stage costume quick change functions). I made a good start on the bodice and skirt, and then it went into the UFO box for a very long time. I took it out once or twice and looked at it, but never got any work done. When purging my stuff before moving last autumn I came across it and decided I would finish it after moving. In January I started working on it again, with the intent to get it done this time. If you’ve followed me on Instagram you’ve seen all the in-progress pictures I’ve posted.

I allowed this project to be without a set deadline, so it wouldn’t stress me but just be enjoyable, and for the most part it really has been. I’ve been working on it steadily but allowed other projects to be squeezed in too. Just over a week ago I got it finished, and as my Mum was coming for a visit I roped her into helping me taking pictures and mind the kids that had to come along for the photo shoot. What would one do without an understanding, long suffering mother? ❤ Some of the pictures were taken with the self-timer function though – one of my best helpers in this whole blogging thing as someone to take pictures is not always available. 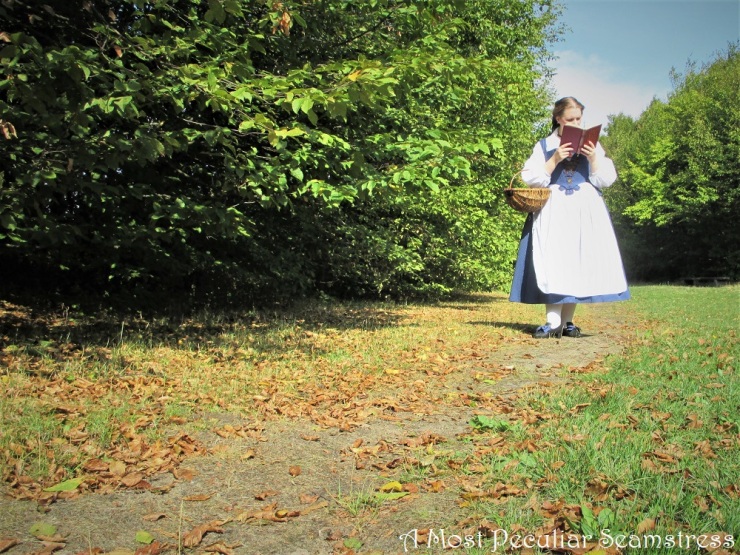 This outfit is loosely inspired by 18th century fashions but are in no way historically accurate. It’s the fairytale version of an 18th century provincial girl, if you wish.

The costume consists of several parts: a square cut shift/chemise with faux neckerchief/fishu, the dress (boned bodice with a basque, laced over a hand embroidered stomacher, with an attached skirt), hand embroidered apron, and hair ribbon.  To give the skirt the proper poof I wore it over a bum pad, quilted petticoat, and several light cotton petticoats that I use on a regular basis with my everyday wear.

I enhanced my own hair with a hairpiece that I already had. I also wore my makeshift stockings held up by knitted garters – not that they showed. A black velvet ribbon and a charm with a book on it, and a pair of made over shoes completed the look. 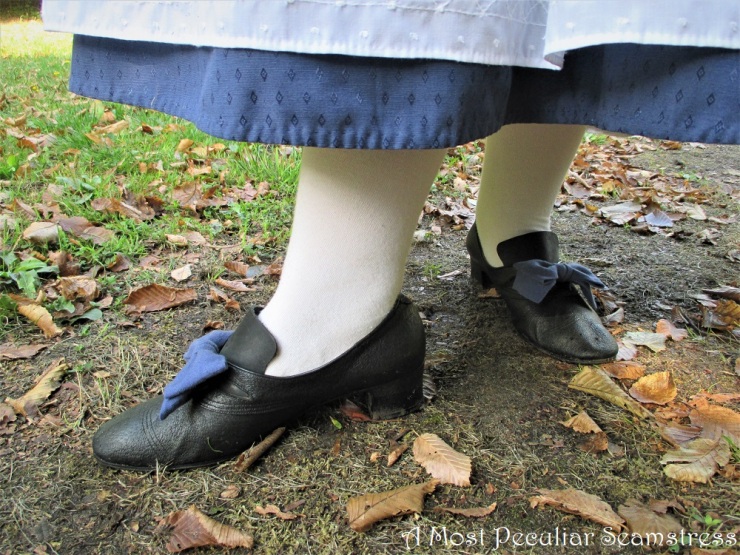 Now, my figure had changed quite a bit since I started the dress nine years before (three kids can do that) so I had to make some adjustments from my original idea, but I think they made the costume better in the end. All in all I’m happy with it, though I might have gone about it differently had I started the costume today.

I like this side by side comparison of my old Belle and my new one. I had very different approaches to making them, and both costumes came out like I wanted them to. That’s what I appreciate about cosplaying cartoons – you can stay very close to the original design, or elaborate on it while still being true to the general air of the original.

Now, I’m in a bit of a dilemma… On one hand, I love making Belle cosplays and just happen to have the perfect fabrics for the green library dress (a dress I’ve wanted to make since I was in my early teens and visited a castle with a smashing library), but I’m feeling I can’t really pull it off anymore – 35 will very rarely look like 17 or whatever her age is supposed to be. I have a long list of more mature Disney characters I’m excited to cosplay, but…

What do you think about my new take on Belle’s blue provincial dress? Let me know if you’d like to see more details or WIP pictures.