Skip to content
When preparing for an outing in 1840’s attire, I realised I didn’t have the number of petticoats I wanted. That is, I could have had an acceptable number, if one wasn’t way too short, the result of a previous makeover. Ooops. Thinking about extant mid-19th century Swedish petticoats, I decided to give it a second makeover. You can see the before(s) here.

I looked through my stash and found a sturdy cotton bobbin lace that was long enough to go around the hem. I whip stitched this in place. I then took a piece of cotton fabric of the same quality as the petticoat, cut a wide strip that I folded in half, seam allowances inside, and whip stitched this to the lace, as seen in the picture below.

And just like that I had a petticoat of a proper length that I really like the look of. Pretty white petticoats are one of the main things that attracted me to the mid-19th century when I was a girl, and I confess I still like them a lot. 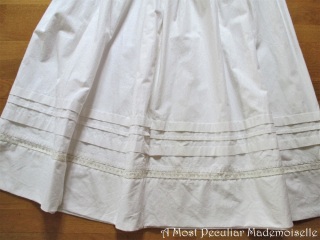 Like most Swedish mid-19th century petticoats, mine closes with tapes in the back. That may not seem as secure as buttons, but I’ll tell you one great advantage: if you’re pregnant and feel like you don’t really need any additional girth over your bump, you can put the petticoats on back to front and the plackets can open over said bump, putting a lot less fabric there, letting the fullness go in the back instead, where it’s much more wanted. The tapes will make sure you’re able to wear the petticoats no matter what your current size. Of course, this only work for about 1830-1865, when petticoats were pretty similar all the way round. And speaking of pregnancy adjustments to your skirt supports; you might want to use a slightly fuller bum pad to somewhat balance your rear to your currently prominent front. 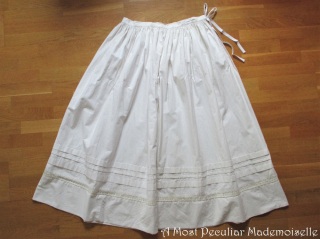 The three petticoats I wore to the event (one corded, one plain and this tucked one with lace insertion, the first two starched) did a decent job of supporting my skirts, but I still think I need more to get proper oomph… One can never have too many petticoats.