Skip to content
Way back in 2009 I picked up a piece of cheery wine red wool at a good price in a fabric shop that was closing. I wanted to make a winter coat from it, but there wasn’t enough for what I had in mind. Soon afterwards I stumbled on a piece of wool in the same quality, but a shade or two darker, in a charity shop, at an even better price. This could work, and I quickly cut out some of the pieces for it. And then life happened. And happened again, and again. I would pick it up, do some work on it, and then it would creep back into the UFO pile.

When I got it out this summer, seven years and two children later, it didn’t fit very well. I had to do some hard thinking, and then, with the help of piecing and added panels, will it to do as I wanted it to. In the end, the finished result turned out all right, if not perfect. The style had changed a little since I cut out the first pieces, but overall for the better, I think. The coat itself is made from the lighter red wool, which also lines the hood and pelerine collar made from the darker red wool – the winters here are mostly wet and windy, and the cold goes straight through you. Extra layers of wool are a good thing. The coat is also piped here and there in the darker red wool. In the pictures, the contrast between the lighter and darker fabrics show best in the hood. 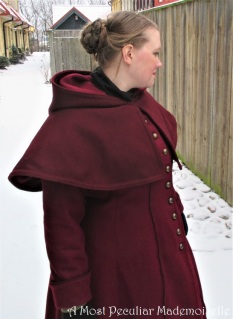 For the construction of the hood I took my inspiration from 18th century hoods, with the pleats radiating out in the back. Since mine was made from double layers of thick wool, the centre of the pleats wouldn’t quite close, so I covered a button in a scrap of wool and stitched it over the hole.

When it was time to line the pelerine collar, I didn’t have any piece of fabric large enough, so I ended up piecing it together from twelve smaller scraps. The facings in the front is also pieced together from four pieces each, and both the sleeves and the lining of the hood ended up being pieced from two pieces each. I wanted a long row of buttons down the front, and luckily I’d salvaged a dozen buttons from an old, worn-out coat I’d made, which would do quite well. I put two of them in the back, and the remaining ten down the front. Even the lining was reused from something else. All in all, the coat looks nice, maybe even expensive, but it’s all clever scrimping and recycling. Elegant economy, as they say in Cranford. 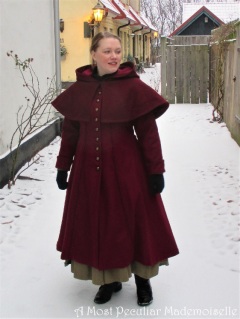 One morning about a week ago it was snowing, and of course I’d have to take the opportunity to get pictures of the coat. After all, a backdrop of snow is much prettier than a backdrop of mud and sad looking, beat down grass.

Ever had to completely remodel a project after taking it from an extended time in the UFO pile?