Skip to content
Today is St Lucia, celebrated in Sweden with singing by Lucia and her followers, but I won’t go into all that too much, as it’s quite a complicated thing to explain properly, with its different origins, evolution and present day traditions – if you want to see how it’s done nowadays, search for ‘Luciatåg’ on YouTube, and you’ll get everything from performances by toddlers and school children to professional televised shows accompanied by popular Swedish singers, or you can read the (mostly accurate) Wikipedia article.
This post will be all about the must-have thing to eat on St Lucia in Sweden – saffron buns, called saffransbullar, lussekatteror lussebullar in Swedish. 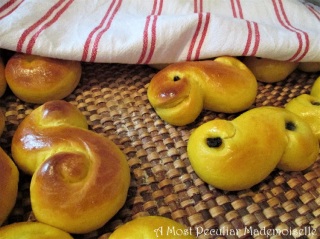 They serve them in school lunch rooms, sell them in cafés, bakeries, supermarkets and petrol stations, but the best ones are home baked. I must confess that the last few years we haven’t had them on that day in our family since it’s our eldest child’s birthday so we eat birthday cake instead, but we do bake and eat them on the first weekend in December, or on the first weekend in Advent, whichever comes first. We also have them for breakfast on Christmas Eve, as that was tradition in my dad’s family when he grew up, was continued in his own family, and is now done in his grown children’s families. Usually they are baked as separate buns, but for our Christmas Eve breakfast, all the buns are put next to each other to make one huge break bread, sometimes in the shape of a tree. EDIT 24th December: This is how it turned out this year: 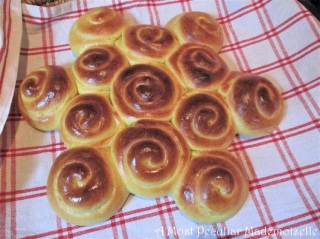 Making these is a good family activity, even toddlers can take part with a bit of help. Of course there are dozens, if not hundreds of recipes for Swedish saffron buns, there is something for every taste, but this is a classic one that I use. For convenience I often use dry yeast (it stores much longer), but fresh yeast works just as well. If you use fresh yeast, change the work order accordingly, dissolving it in some of the buttermilk rather than mixing it with the flour.

Butter: 175 grams
Milk: 500 millilitres
Yeast: 50 grams (or the same equivalence in dry yeast)
Sugar: 175 – 200 millilitres
Ground saffron, ground: 1 gram
Plain wheat flour: about 1500 millilitres
(Egg: 1)
(Raisins)
Start by melting the butter in a saucepan. While it’s melting, grind the saffron in a mortar to release the flavour. You don’t want a weak saffron flavour, so feel free to add a bit more saffron than the recipe calls for. 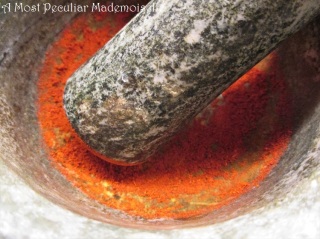 When the butter is melted, add the milk and saffron, and heat to finger temperature. 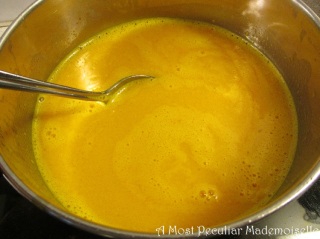 Pour most of the flour into a bowl or dough mixer. I’m one of those weird people who rather like to mix bread dough and whip cream by hand. Add the sugar, salt and dry yeast, and mix well.

Add the egg and mix it in. (Optional, but it will give a more flexible dough.) 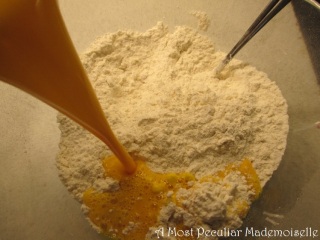 When the dough is of a good bread dough texture, letting go of the bowl, sprinkle it with flour, put a tea towel over it and let it proof to double size. (Note: if in doubt, better leave the dough a tiny bit too wet than to dry. It’s easier to add flour later if needed, than to remove any.) 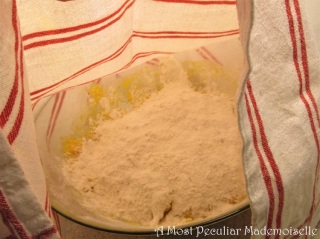 Put the dough on a floured surface and knead thoroughly, until it becomes smooth and elastic.

Make the buns. Take a piece of dough, roll it out, and then coil the ends to make a somewhat exaggerated curly S-shape. Traditionally many different shapes were made, but this one is most common today.

Put the buns on a baking sheet covered with baking parchment, push a raisin into the middle of each coil (optional – I don’t like raisins in bread, so we leave some of them plain), cover with a tea towel and let them proof again, for about 30 minutes.

The buns have proofed enough when they spring back when gently poked. Give the buns an egg wash and put them in the middle of the oven, at 225-250 degrees Celsius. Depending on your oven, it will take about 5-10 minutes – they should be golden brown on top when finished. 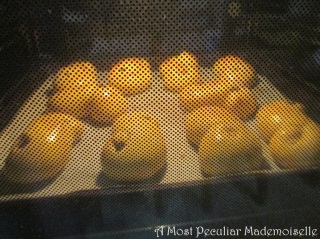 Eat them as they are. Yum!

A common thing to have with saffron buns isjulmust, a non-alcoholic, carbonated drink flavoured with malt and hops. Non-Swedes usually dislike it at first try, but for Swedes it is such a typical thing to drink in December, and many people have opinions on which brand is the tastiest. If you feel like giving it a go, I believe many IKEA stores have it, but I can’t vouch for how good it is – we have another favourite in my family 😉 If julmust is not an option, milk, tea or coffee are other common drinks to have them with.

If your’re Swedish – do you have any family traditions with regards to lussebullar? If you’re not Swedish, have you tried saffron buns? How did you like them?