Skip to content
When browsing Pinterest I came across these crocheted little stars made by Persia Lou, and as each star only require two rounds, I though they’d be quick and fun to make. The pattern called for wool yarn, but though I love wool, I’ve had wool ornaments eaten by bugs when in storage, and as I’m in enough worry over my stash of wool fabrics and yarn, not to mention my historical clothes, I decided against that. The cotton yarn that I had of a suitable colour was too thin, so I tried making them from hemp twine that I had at hand. It worked very well, except that the twine was a bit rough to work with, so I could only make one or two stars at the time to protect my hands. Unlike the instructions in the pattern, I did not starch my stars, so they are a bit less crisp and pointed than the originals, but nice anyway. 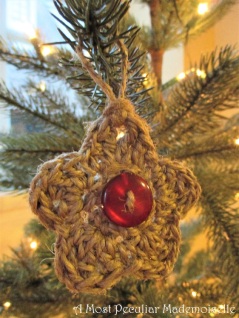 Once they were done I thought they needed an extra little something. I once got three small bags of buttons, in green, red and blue respectively. It wasn’t the best deal of my life, as it turned out that rather few of the buttons actually matched. For this project they would work well though, so I picked out every red button of the size that I wanted, and stitched one in the centre of each star. I made a hanger from the twine, and the ornaments were ready to be hung.

Simple but pretty, if one is into a Scandinavian Christmas decor, an “old fashioned” Christmas or the “rustic” Christmas (whatever that’s supposed to be) that seem to be one of the trendy themes right now.

Have you crocheted some kind of ornaments for Christmas?