Skip to content
It has been an unusually long summer here, and almost every day of September has been warm enough for wearing short sleeves and running barefoot, something the children have taken every advantage of. Now however, there has been a turn in the weather, and it’s decidedly autumn. While the summer itself wasn’t a good time for me this year, I love autumn, it is my favourite season, and I have decorated for it using lovely things found in nature.
I put all kinds of greenery and berries in an empty jar; there is oak, maple, rosehip, boxwood, and some things I don’t know the names of. In a glass container I put glasses that I use as candle holders and decorated with chestnuts, acorns, and cones from pine and spruce. The cones will be used for Christmas decorations too in a couple of months. 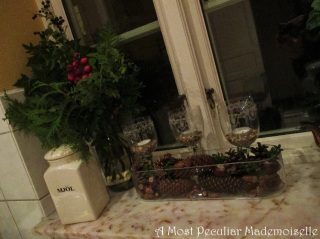 Having the tealights lit would have made a prettier picture, but one has to
consider the fire hazard an all that – they were too close to the greenery to be lit.
In the kitchen lamp I have hung hops, more spruce cones and a string of rosehip. There are various smaller plants, neatly labeled, hung there as well – these things are primarily for our Halloween party, but they look pretty for autumn as well. 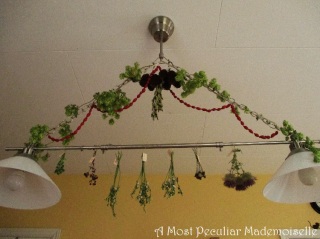 In a bell jar I created a little woodland scene – here’s a post on how I made it. 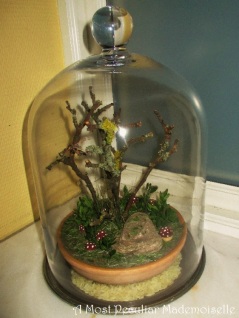 This month I’ll be teaching a class on making Empire/Regency working class dresses, and I’m so excited! It’s rather a small class (but for a small group of real nerds, lower class is not the most popular thing amongst those doing 19thcentury in Sweden – not yet anyway), but I’ll be happy to see the finished dresses all the same. 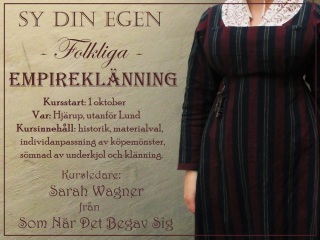 Preparations for Halloween are coming along; the Hogwarts House wall hangings are up, as is the display of Muggle money. Plans and preparations for food is also being made.
I have joined a letter exchange role play, set in the world of Jane Austen’s England, 1816. I’m corresponding with an old “schoolfellow” and a young “niece”. The character I have chosen for myself is a clergyman’s wife by the name of Mary Carter in a village in Surrey, and it is great fun trying to think and express myself in a way familiar to anyone who have read Jane Austen. 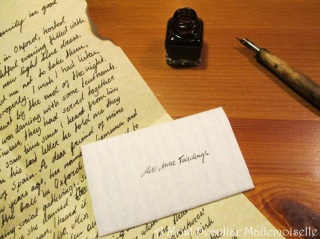 See what I meant by fire hazard?
My “niece” had a bit of an accident with my letter.
So far the autumn has treated me a good deal better than the summer did. I hope it will last 🙂