Sometimes I sew completely different things from what I usually do. My youngest turned two recently, and as he likes to watch Peppa Pig, and likes George Pig especially, I decided to make him a soft toy George. I found a pattern and step-by-step online, and though it was in Portuguese, it was clear enough for me to follow.

The pattern called for felt, but I had to use my stash, so plain cotton it was. Luckily I had large enough scraps of the colours I needed, except for a slightly darker pink for the cheeks. Considering the materials I had to work, I had to make some minor changes, but they are hardly noticeable on the finished toy. It was all hand stitched, as I’m still without a working sewing machine.

One thing I changed completely was the tail. I wanted a really curly tail, so I drew a new pattern for it, and attached an elastic almost at the tip of the tail before I turned it right. After I’d stuffed the tail a bit, I pulled the elastic a bit, and the tail curled nicely. I believe the tail is Little One’s favourite feature, trying to hang poor George up by it all the time. 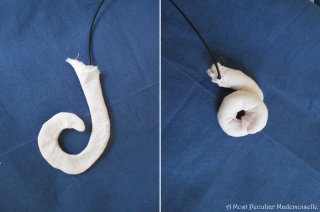 I made the mouth and nostrils using embroidery floss, and when time came to make the eyes, I was running really short on time. Instead of making them from fabric as I’d originally intended, I decided to make them from buttons, one white and one black for each eye.

If it turns out that Little One can’t keep from trying to pull them loose, I’ll replace them with safer fabric eyes later – so far he’s far too fascinated by the tail to care about anything else tough. 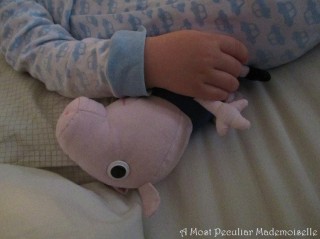 It was an appreciated birthday present, which makes me happy.