Those of you who follow my Facebook page might remember that I wrote about my wish to make miniatures, but not thinking I had the time and space for it. Well, I found a loophole… My mum’s birthday was coming up, and she likes miniatures. She is also a Harry Potter fan, with a particular love of the Weasley’s home, the Burrow. Early one morning, when hovering between sleep and wakefulness, I was struck with the thought that I’d knit the beginning of a Weasley sweater in miniature, and maybe make a miniature book, a wand, a cup of tea….  It quickly snowballed from there, and two weeks later Molly’s Corner was a fact. 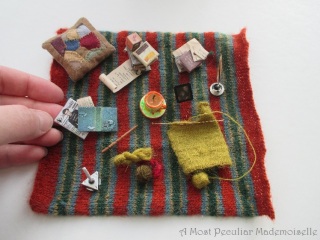 I had no budget at all for this project, but luckily a stash of materials for creative stuff of all kinds. I decided that the moment in time of this miniature would be set a few years after the Battle of Hogwarts, when all the children had left home, and most of them had married and some started families of their own. 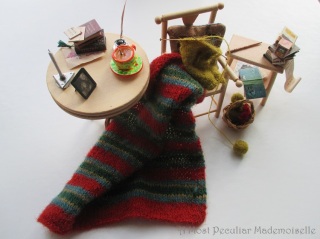 In the end I made
– almost the entire front of a wool Weasley jumper, and some skeins of yarn
– a knitted wool blanket
– a pillow in crazy quilt patchwork technique
– a wooden wand
– a candle on a candlestick
– an inkwell with a quill
– a framed picture of Arthur and Molly Weasley from the films
– several books
– letters, both unopened and opened
– a shopping list
– a child’s drawing
– Witch Weekly Magazine
– a box with merchandise from Weasley’s Wizard Wheezes
– a cup of tea
The jumper was knitted in thin two-ply wool, with a gauge of 9 stitches/cm (23 stitches/inch). Had I had longer needles to knit on that wouldn’t have been a problem – I like knitting on thin needles – but I only had embroidery needles, and being so short they made my hands cramp if I knitted for too long at a time. The knitting needles I transferred the stitches to is made from jewellery supplies. I made some additional balls and skeins of yarn to make it look more complete. As the knitting is small enough to carry it’s own weight, it’s quite easy to position it so that it looks like it’s knitting on it’s own.

The blanket was knitted in one-ply wool yarn on 1,5 mm knitting needles. It was loads of fun to do, even securing all the loose ends after casting off.

The crazy quilt pillow was stitched from small scraps of linen, cotton and raw silk fabrics. It was stuffed with a single layer of quilt batting.

The wand was made from a thin wood stick from my craft stash. I sanded it down, stained it brown and varnished it. It doesn’t look like Molly Weasley’s wand from the films, as I didn’t think to google it until I was finished, but I think it’s cute anyway.

The candle was made from the same stick as the wand. I made a small hole in one end, and after painting it, I glued a piece of waxed black quilting thread in it for a wick. The candlestick was made from the wick holder in an old tea light, that I bent into shape. Another time I think I would have liked to spray paint it a copper or brass colour.

The inkwell was made from two parts of different sized grommets and an orphaned part of an earring. I glued them together and splattered the would-be inkwell with black paint for ink. The quill was made from a small feather escaped from a pillow, that I used glue from a glue stick on to hold its shape. I then glued the quill to the inkwell.

The framed photo of Molly and Arthur is simple as can be: a picture from off the internet, sandwiched between two pieces of scrapbooking cardstock, the top one cut out to be the actual frame. It has a stand from the same cardstock.

For the books I used book covers that I downloaded from the internet – as there are so many I’ll just post a list of links at the end of the post. Some had titles that are mentioned in the books, and on some of the blank ones I added titles of my own, like “Delicious Desserts with a flick of a wand” or “How to care for your owl”. I then printed them out and glued them round small pieces of cardstock. The pages were made from paper that I’d dyed in tea, cut and stitched together. Depending on how I wanted the books to look (closed, partially opened or completely open) I stitched the pages in slightly different ways. The open books were given insides in patterned scrapbooking paper, but I didn’t bother with that on the closed books. The stitched pages were then glued to the covers, some of them with scribbled paper scraps, an entry form for The Daily Prophet’s yearly lottery, or a tasselled bookmarker (made from sewing thread) glued between the pages for visual interest. Most of the books were glued together into stacks, with various other stuff (letters, a child’s drawing e.t.c.) between, under or on top of them.

There are two unopened letters made from the same tea dyed paper as the books, one showing the back with its seal, the other one addressed to Bill Weasley. The first letter was actually addressed to Molly herself, but I decided the back was also interesting to see. The letters are glued to a stack of books, or I’m afraid they’d quickly get lost. The opened letter is from Percy. It’s really just a short note to let his mum know that “we’re coming to dinner on Sunday”, and even though you can’t see it, glued between books as it is, I thought it was a nice touch to show him on good terms with his family.

The shopping list has a mix of very ordinary things like tea, flour and socks, and more exotic things like dried spiders and essence of dittany on it. I like that it’s so long it can trail off the edge of a table, as parchments are often described as doing in the books. 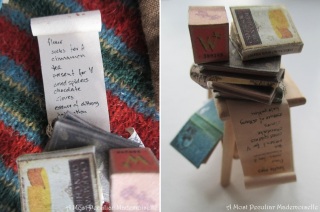 The Witch Weekly coverwas also taken from the internet, but I changed a few things: I gave the dress of the silhouette witch bell sleeves and made it longer – I imagine Witch Weekly is mostly read by adult, maybe even middle aged witches, not teenagers or young adults. A mini skirt looked rather silly in that context. I removed the date – I’m aiming for a few years into the 2000’s here after all. I also changed some of the headlines – “fallfashions” just wouldn’t do on a British publication. As I couldn’t fit “autumn”, I just changed it to “spring”.  I made some other small changes as well – a bit pointless perhaps, as they don’t really show on such a tiny magazine, and part of it is hidden anyway, but it felt nice to make if fit my vision. Still, a thank you to the person who made the cover in the first place! I assembled the magazine in a similar fashion to the books, but simpler – I just glued the stitched together pages directly to the folded paper of the cover. I’m not sure Harry would have liked a heroic cover picture like that of himself, but he’s instantly recognizable, and it is rather fun to see him as an auror.

Balancing on top of one of the book piles is a box from Weasley’s Wizard Wheezes, where Ron was working with George by this time. I always thought it was nice that they started working together, though I’m sure they both felt that it should have been Fred. I still haven’t got over his death, and having lost a sibling myself I know they – George especially – never did either. 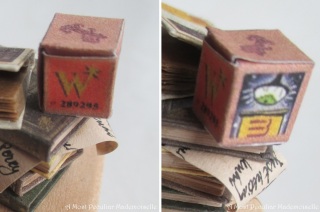 I thought that Molly would like a big cup of hot tea when getting comfortable in her corner, so I made a cup and saucer from polymer clay I had left from years ago, when I made (rather ugly) miniature dolls. I painted it in green and orange shades, as my mum like those. I would have loved to fill it with resin water, but that wasn’t in my budget, so I tried to gradually fill it with craft varnish. It worked rather well I think, though not perfect. I gave the cup a spoon as well – self stirring for a bit of magic. The cup looks a bit chipped and worn, and the spoon handle is a bit battered as well – this is the Weasley family after all.

All these little things were put in a large matchbox that I’d covered and lined with scrapbooking paper, and decorated with a scrapbooking tag and some organza ribbon.

So, how do I feel about making miniatures? I love it! I would obviously need lots of practice to become proficient, but I feel this is something I will do more of, when time allows. I’d also love to try and make miniature dolls again, and see if I can make prettier ones now. But first I have other things to do.

8 thoughts on “Molly’s Corner – a Gift of Miniatures”