I’ve been meaning to give my maroon kirtle a makeover for a long time. I wanted long sleeves, instead of the short ones. As so often happens, it didn’t get done until just before the event, when I realised that, due to breastfeeding related reasons, my yellow kirtle just would not close. Something I’d only wished to do now became absolutely necessary.  I removed the short sleeves just a few days before the event, cut out new ones, and began to stitch as fast as I could. 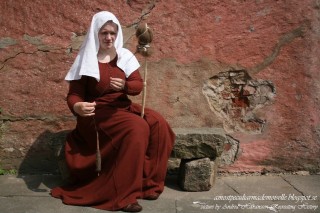 But then I decided I wanted quite a few buttons – the quality and colour of the fabric is really rather nice, so I might as well give it the most fashionable trait of the century. 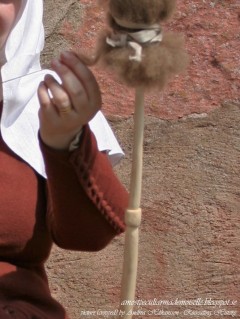 I made twenty-four small (less than a centimetre in diameter) cloth buttons, a round dozen for each sleeve. Here’s an illustration of the whole progress of button making.

When we went to the event I still had a few button holes left to sew, which I did when only the one-year-old and myself were awake of all the camp.
I had pictures taken by Andrea, and as I planned to submit the made over dress to the manuscript challenge, I did my best to imitate the inspiration image. The veil is a bit too long, but it will have to do. In the inspiration image you can’t see the front of her dress, nor if there are any buttons on the sleeves. Most likely the dress is one that pulls on over the head, but as you can’t tell for sure, I call it good anyway. Same with the sleeves.

Stained glass window of Adam and Eve working. It was made in the late 14th century,
and was originally from Marienkirche, Frankfurt an der Oder, Germany,
but after WWII it was taken by the Soviet Union and is now in the Hermitage Museum in St. Petersburg.
Though I forgot which way she was turned, I still think it ended up rather nice. Thanks to Vix for lending me her distaff and spindle. I’m afraid I made a mess of her work. I’m a decent enough spinner on a beginner’s level, but I haven’t figured out how to work with the distaff yet. 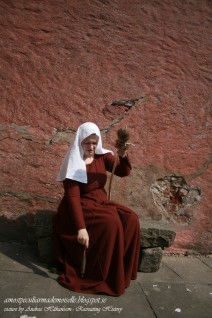 I am a bit disappointed that I didn’t get the greyish-blue kyrtil made for hubby, but sometimes life does not co-operate. I did achieve half the challenge anyway.