I finally got some pictures of my witches bonnet for the Historical Sew Fortnightly. Tobias comes home from school so late every weekday that it’s already dusk, so I haven’t had the opportunity until today. The whole family went for a little walk, and then we stopped for pictures in a nice place. I got the odd look from passers by, wearing a bonnet like this in a perfectly normal neighbourhood 🙂 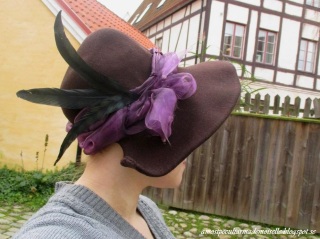 The bonnet was originally an ordinary woman’s felt hat from the charity shop, nothing special at all. I got it years ago, and had already cut away a piece at the back, stitched the brim back up, with millinery wire inside the fold, and steamed and slightly reshaped the crown to give it a slightly quirky look. 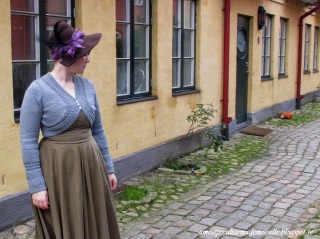 Now, the only thing I had to do was line the brim and trim the thing. Simple enough. I didn’t want the lining to differ too much in colour from the bonnet, and I was lucky enough to have an old, worn out blouse in my stash. It was brown, with a woven in pattern. I just cut a straight piece from it and stitched it to the inside of the brim, with the width taken up in pleats where brim and crown met. 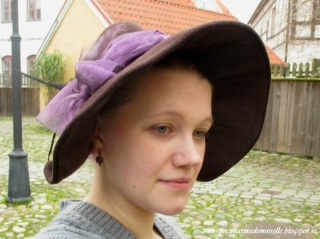 For the trim, I cut a curved piece of organza, left over from a previous project, twisted it slightly, wound it round the crown, and tied a bow. I twisted and interlaced an old necklace made from organza ribbon and glass beads round the fabric and pinned some feathers under it. Done! Simple but effective. Now I only need some proper witches robes… 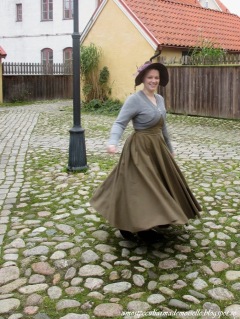 What the item is: A witches bonnet.
The Challenge: #20 Alternative Universe.
The Alternative Universe: The wizarding world that creates the backdrop for the Harry Potter books.
Fabric: Wool felt hat, cotton, synthetic fibre organza.
Pattern: None.
Year: Somewhere between 1830-2014: the wizarding world doesn’t really follow Muggle fashions.
Notions: Organza ribbon, glass beads, feathers, cotton thread, pins.
How historically accurate is it? Not a jot. It’s loosely inspired by 1830’s bonnets though.
Hours to complete: Remaking the hat and lining the brim took a few, but adding the trim only took minutes.
First worn: For our Halloween party last week.
Total cost:  Nothing at this time, everything was in my stash.

3 thoughts on “A Witches Bonnet”