Eleven years ago I made a dress to wear to the premiere of the final part of the LoTR saga, The Return of the King. I took my inspiration from the Elvish styles in the movies, but both the dress and the embroidery was my own design. 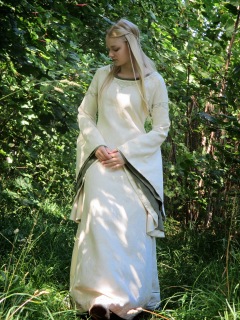 The dress is made from a semi stiff and rather heavy fabric with a woven in pattern. The sleeves are lined with linen. The neckline and sleeves of the mock under dress are made from raw silk. 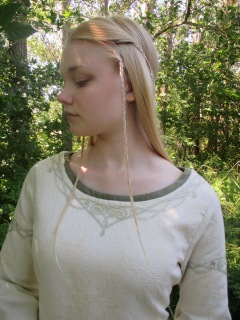 It is a lovely dress, but sadly I never got any pictures of myself wearing it, and now I can’t fit into it anymore, as I have a rather more Hobbity shape than I had when I was twenty. I’ve been thinking for some time that my sister E might be able to wear it, being of a similar height to me, though a bit more slender than I was when I wore the dress. As she was staying with us for little over a week, and the dress fit her well enough, we took the opportunity to have a photo shoot.

She was wearing a piece of hair jewellery I made myself for the premiere of The Two Towers, twelve years ago, obviously based on Arwen’s beautiful one from Fellowship of the Ring. It was more striking against my darker hair (which back then reached passed my tail bone), but looked pretty against E’s fair hair as well. 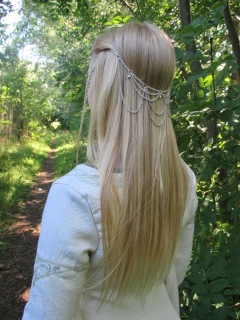 Her hair looked a bit like that of Legolas, so we thought that if he’d had a little sister, this might be what she’d had looked like. Or it could just be any young Elvish maiden. 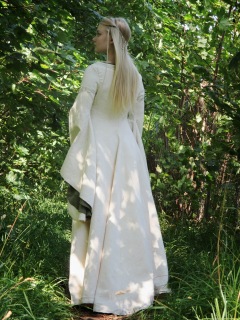 While taking the pictures we discussed elves and wondered how quickly they grow up. How fast do they mature, intellectually and physically? When are they considered being of age?  I like to know such things – even when it is a make believe people in a story….

12 thoughts on “The Elvish Maiden”