I apologise for the long absence, I’ve not been feeling my best lately, and most of the little energy I’ve had has been spent on getting the daily housework and packing for our upcoming move done, so not that much sewing. As I have a mid 19thcentury sewing demo coming up at the beginning of December however, I decided I needed a quilted petticoat to wear under the insanely pieced dress I made for HSF challenge # 10, Literature. Such petticoats were called stubb in Sweden at the time.

The petticoat is mostly based off of this one from Nordiska Museet. 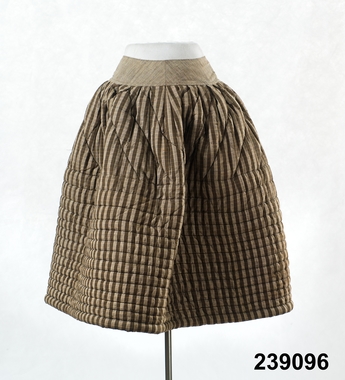 It’s dated to the 1860’s, as it’s machine sewn, but its mint quality is thought to originate in it being made to an earlier style, so that it went completely out of fashion soon after being made. That would put it in the late 1860’s, but in the style of five or ten years earlier. Must have been vexing for the person who made it, and never got any use from her labours, but it’s good for me. Quilted petticoats didn’t go out of use though; they just got a more A-line look as the century wore on, instead of the tea cosy one of the mid century. This petticoat is all in home woven cotton. What was used for batting is unstated, but wool or cotton is most likely.

I didn’t mean my petticoat to be an exact replica (that would be difficult without examining the piece in person), just inspired by the one above. I’ve been looking at pictures of other quilted petticoats as well. My fabrics are also cotton, but the outer one doesn’t have the same kind of check as the original, and the lining is white instead of grey. The original measured 79 cm long and 200 cm wide at the hem. Mine is slightly shorter (almost too short) with 70 cm in front and 73 in back (to keep it balanced) and 210 cm wide at the hem.

It has a cotton batting. I used materials I had in my stash, so at this time its cost me nothing but the work.

The batting end just before the skirt is attached to the yoke, so as not to add bulk. The original closed by a hook and eye, but I like my petticoats to be flexible in waist sizes, so I put in a drawstring at the top.

The petticoat is slightly too wide in the waist for a normally sized me, and still have a little to give, though I’ve gained some weight lately. I push the gathers to the back, to add a little extra oomph there.

I decided to hand sew my petticoat, as I’m aiming for a slightly earlier period, and also prefer quilting (and indeed sewing in general) by hand. The checked fabric made it really easy to do the quilting, as I could just follow the pattern. The quilting was fun, but the assembling was not: I was very glad to be done with it. I’m also very happy with the result. It gives my skirts great poof, and, somewhat similar to a crinoline, it stands out from the body enough to allow rather free movement of the legs. Here I wear the dress with just the quilted petticoat and a plain linen one. If you want to compare you can follow the link to the challenge # 10 dress above.

As this challenge was about gratitude I’ll mention a few people and institutions: First my Mum, who taught me to sew when I was a very stubborn little girl, who wanted to do things my own way. She also gave me the checked fabric years ago.
Second, I’m grateful to my husband, who is very accepting and supportive of my hobby: when I discovered I’d made a mistake with the quilting, and was choosing between unpicking a lot of seams and remake it the proper way, or just ignore it and go on, he said to redo it, as I’d always be annoyed by it if I didn’t. How very true.
Third, I’m grateful that some people in the past understood the value of preserving even ordinary peoples clothing for future generations.
Fourth, Emma Frost, who sent me some pictures of an original she’d examined. Very helpful indeed!
And last, but certainly not least, I’m grateful for all the museums that put up their collections on the internet, thus enabling us who make historic clothing to do a lot of our research from the comfort of our homes, when not having the opportunity to study old pieces of clothing in person.

The Challenge: # 23 Gratitude
Fabric: Checked cotton and white cotton.
Pattern: None, it’s based on pictures and measurements of originals.
Year: Ca. 1840 to 1865-ish.
Notions: Cotton thread, cotton batting and cotton tape, all from stash.
How historically accurate is it? Pretty much; the cut is period, and it is hand sewn with period stitches, using cotton thread. I’ve never examined a quilted petticoat in person though, so some of the stitches might not have been used where I put them. There is always room for improvement. The kind of check used for it does exist in some extant period clothing, but I’ve never seen it in a quilted petticoat.
Hours to complete: Say 19, including two or three of having to unpick stitches and redo part of the quilting…
First worn: For the pictures, and then hopefully at the beginning of December.
Total cost: None but time.