A few weeks ago I finished Tobias’ new cote. It’s made from a soft green wool fabric, and has 34 buttons down the front and 13 on each sleeve. That makes 60 hand made cloth buttons and hand stitched buttonholes in total. 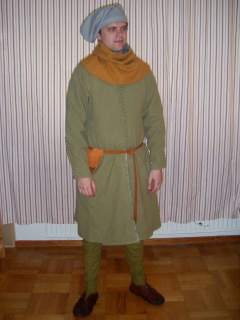 The cote is made to be worn as outerwear, so it’s a bit longer, and wider in the body and sleeves than his other one, but the look is rather fashionable for the late 14thor early 15th century. I placed the buttons tight over the chest and more spaced from the waist down, as in this one from about 1360.

Walter de Heylon, died 1357 or so.
The most interesting feature of this garment is the tablet woven edges on the sleeves. I’ve been planning to tablet weave on clothing for a couple of years, but never got round to do more than a trial run until now. I used two tablets with all holes threaded, so a total of eight one ply wool threads. I don’t recomend that; the weft tread kept breaking, which was very annoying.

In the end it turned out very nice indeed and was quite easy (apart from the breaking thread issue). I can’t believe I’ve not tried it before this. Well, actually I can: it’s down to the two facts that it’s a bit of a hassle setting up the warp and that “everyone” is putting tablet woven edges on “everything”. It’s beginning to feel like a reenactorism. At least there is plenty of evidence for woven edges next to sleeves’ buttonholes, so I don’t feel bad about that.

Don’t have much to add on this one. It’s hand sewn with unbleached linen thread, as most of our other medieval clothes. It’s one of those projects that caused some problems along the way (the sleeves just wouldn’t do what I wanted them to) but turns out acceptable in the end. It will do very well for cold weather wear. 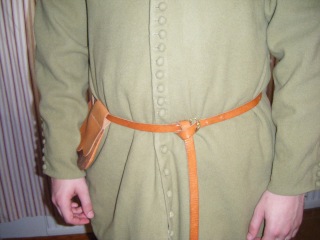 I’m working on some body linens for a friends son (they will go in the HSF “white” challenge), but apart from that I’m taking a break from historic sewing. I have been feeling stretched thin by too many things to do; giving my family and home enough attention, a school paper, wanting to do something about my woefully neglected modern wardrobe, all the period clothes I wanted to make and all the events I wanted to attend, my other (a beginner’s guide to the Middle Ages) blog that needs a lot of research and work. I had to drop something. At the moment I try to dedicate my mornings to school (Tobias is on paternity leave all summer and takes care of B), my afternoons to my family and some modern sewing, and my evenings to my husband, modern sewing or occasional blogging. I have several future historic projects planned, but for the time being they will have to wait. It’s time to get my priorities right.
Anyway. Though it’s finished a bit early I thought I’d enter this to one of the HSF challenges.
The Challenge: # 16 Separates

Wool, and linen for the facings.

Tolerably. It looks sort of right, and it’s made using period cutting and sewing techniques.
Hours to complete: No idea.
First worn: For the event two weeks ago.

Not sure, the fabric’s been in my stash for a couple of years.