Continuing my research on common women’s dress in Sweden in the mid 1800’s (the post on dresses is here), I will now focus on underwear, as it is the foundation for achieving the right silhouette. Now this series focus on the fashions of the day as interpreted by commoners, not folk costumes, though they were still used for everyday and holiday in some parts of the country, were gradually replaced by more current fashions in others and often had a few lingering elements used with more fashionable dress.

First, as always in historic costumes, is the shift. It was still cut using squares and triangles at this time and place, and could be made from linen or cotton. Linen was grown at home by many farmers, but cotton was imported and had to be bought. Both materials could be spun and/or woven at home, and was often relatively sturdy. The shift was often very simple, slightly flared, with short sleeves, underarm gussets, without any decoration, or it could have a simple, narrow, not too delicate lace round neckline and sleeves. The lower women did probably not have lace edged shifts for everyday, if ever. It sometimes had a slit in front, closed by a button.

I had a bit of trouble finding extant shifts from the 1840’s through 60’s, as many museums are woefully behind in digitalizing their collections. If you compare these doll’s shifts from that period, with women’s shifts of the later 19thcentury, they do however have very much in common, and do not appear to have changed much as the century wore on.  Those of my American readers doing this period might notice these shifts are a lot simpler in construction than some of the chemises they base theirs on. 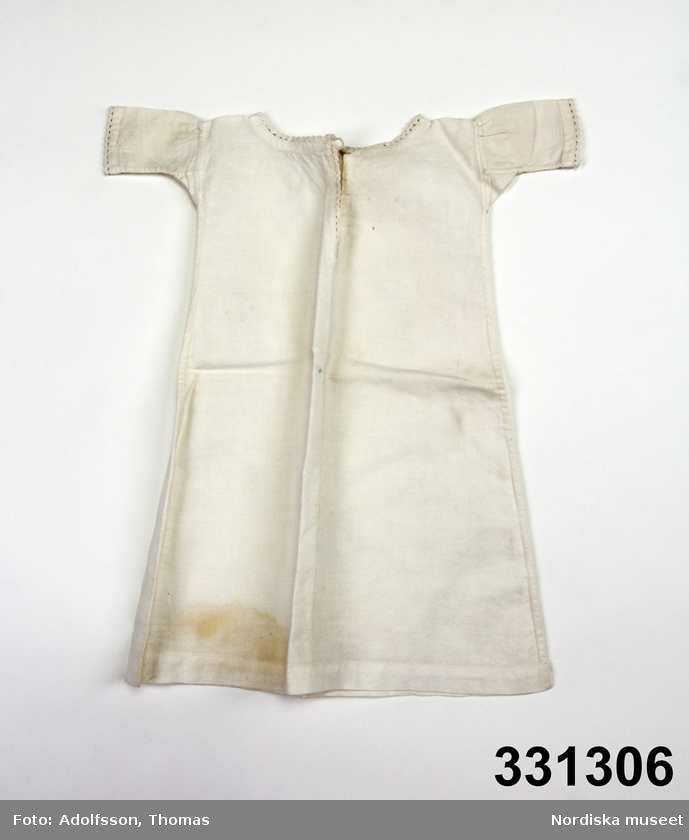 Doll’s cotton shift from the 1850´s or 60’s.
The doll who wore this represented a wealthier woman, and her large,
fine wardrobe is preserved. Still, the construction is simple.

Cotton shift belonging to the same doll as the previous one. 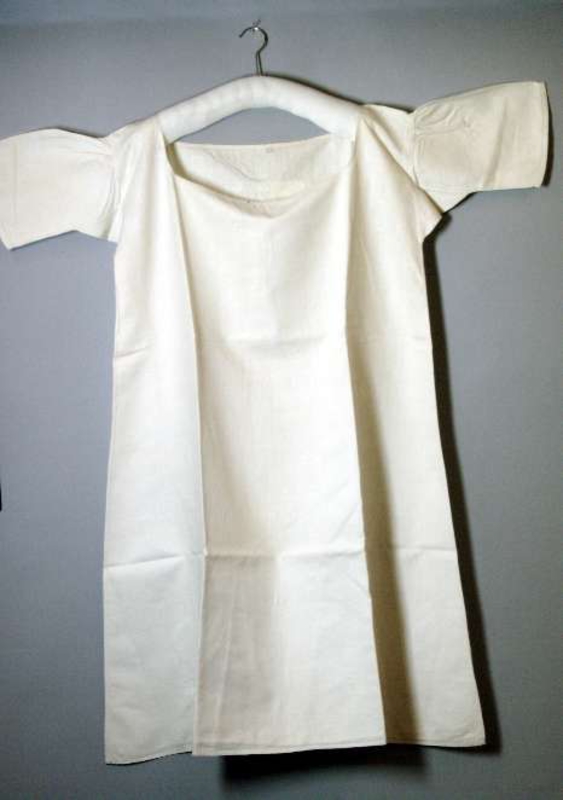 Linen shift, unknown date. The construction looks much like the others though. 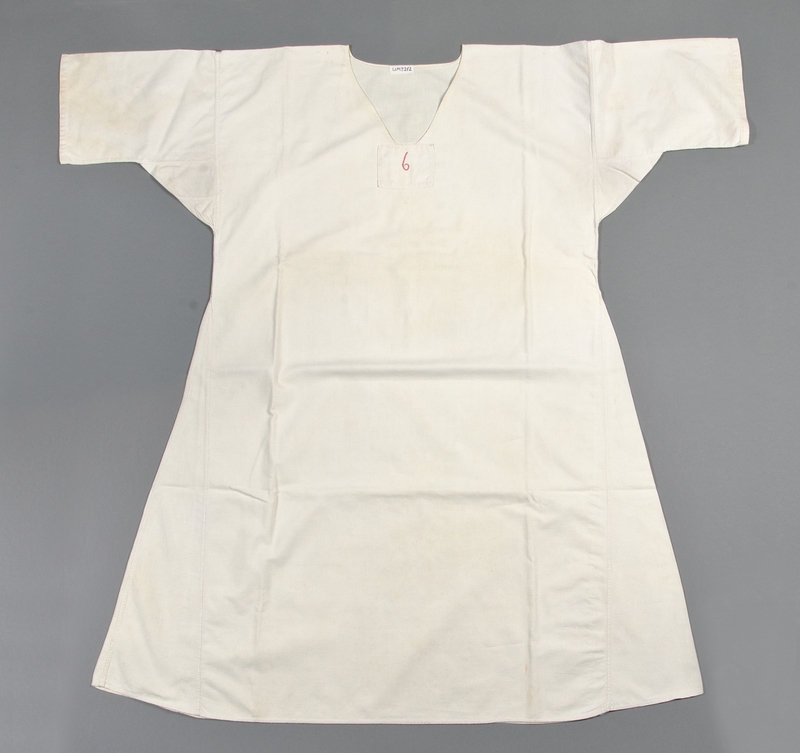 This cotton shift belonged to a woman born in 1833, so
would be from the second half of the 19th century 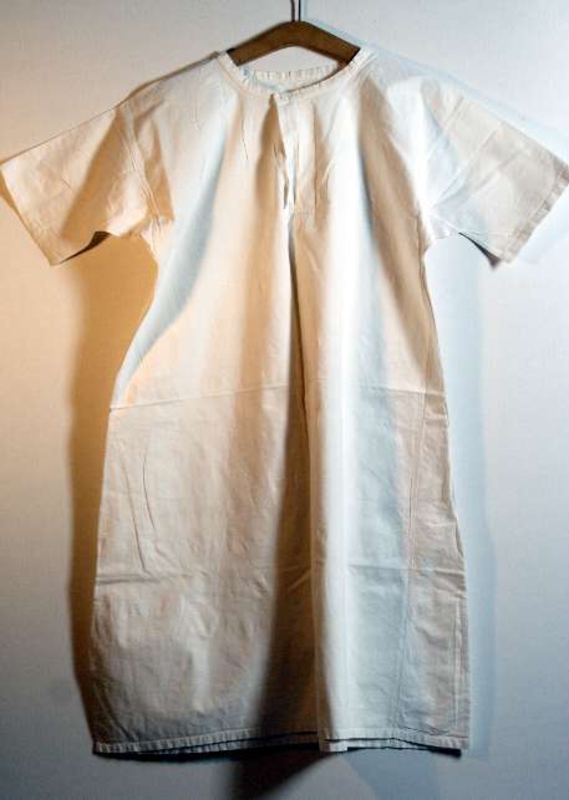 The owner of this shift, also in cotton, was
born in 1842, so also later 19th century

As for pantalets, drawers or what else one chooses to call them, they were very unusual at this time and place for all women, but those of the highest classes. In this painting showing two ladies getting dressed, the lady on the left is wearing drawers, and what I interpret as what might be loose pantalet legs hanging over the end of the right bed; but these women were middle class, if possibly rather poor.

Two old maids (the artist to the right) getting dressed for another day taking the waters in 1856.
Stays or corsets are another tricky question. I mentioned in my last post on this subject, that some dresses were so heavily boned with cane that it’s unlikely any other support was needed. But some dresses have no boning at all – did their owners go without any support whatsoever, or did they wear some kind of stays or corsets? Likely, (and I’m basing this primarily on discussions with likeminded who’ve studied original dresses from this time) both alternatives existed, with stays or corsets being more common in towns, but a bit unusual in farm wives’ and their daughters’ wardrobes. Now, there were farmers and farmers; some were exceedingly wealthy, and others hardly able to support themselves. Hundreds and thousands of the latter would emigrate to America in the century that followed, which is why I think some of my New World readers might find this interesting. Financial status would naturally have an effect on what clothes were worn by this group as well as those in towns. (Edit 18 April 2014: last winter a friend of mine was helping one of her friends making a country woman’s dress, the pattern traced off an original. They kept getting these odd pouches close to the armpits. It wasn’t until they tried on the dress over 1840’s style stays that it sorted itself out – this dress at least had clearly been worn over stays.)

Now, these stays dated to the 1830’s or 40’s are not Swedish, they‘re from the Met,
but something like this might still have been in use in smaller Swedish towns,
and by the less fashionable, in the 1850’s and 60’s.
In a book I have about underwear in Sweden from the 18th century till today (Underkläder – en kulturhistoria, by Britta Hammar and Pernilla Rasmussen, page 71), a woman remembers her childhood in Jönköping (a town of middling size, quite far, by 19th century standards, from the larger cities) in the 1850’s and 60’s (translated from Swedish by yours truly, so excuse any errors) that the corsets were: “…cut in one in front, laced in the back and very long. In the centre front a rather wide and long steel ruler were inserted…. the so called busk, which the ladies…. often laid aside, in the late evenings, when they were conversing confidentially in the discreet light of the lamp. What a wonderful relief!”It would seem the more modern corset with the front opening busk could take some time to spread further than the higher society in the more central towns and cities, and old fashioned stays (sometimes with simpler front openings) still be used by the rest. In the painting above, you can see the lady on the left wearing her stays or corset, and these extant examples provides further proof: 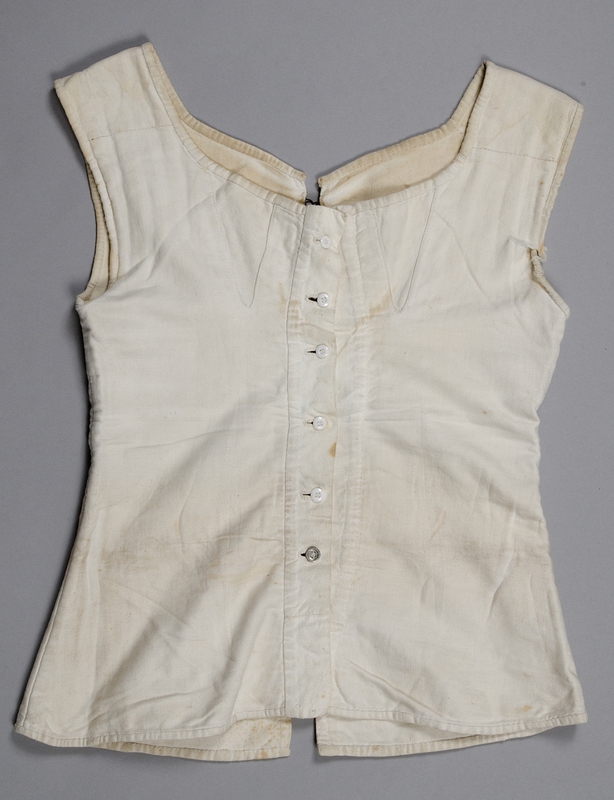 Very simple cotton stays, ca. 1840-60. Unfortunately
no front view exists, but it’s said to be buttoned with six
buttons. It was worn by a country woman. 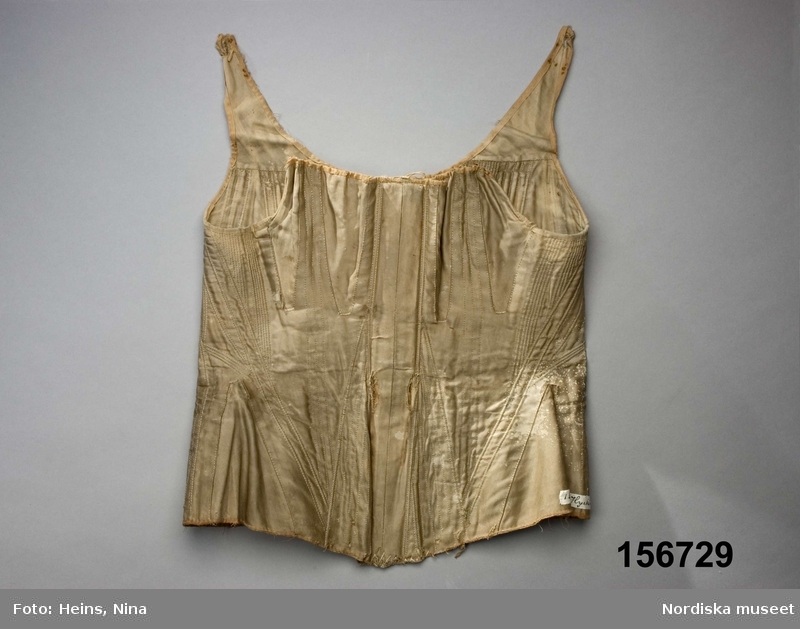 Even when folk costumes were worn, several petticoatswere often the norm, and this is also true for dress of a more fashionable approach in the lower classes. Petticoats could be made from wool, linen, and cotton. They are usually rather simple, without any decorations, with the possible exception of tucks. Wool petticoats were often coloured. For added volume a corded or quilted petticoat could be worn; the quilted ones were probbly more common than the corded ones in the country. The quilted petticoats (made from wool or cotton, often printed, striped or checked) must also have been very nice in the winters. 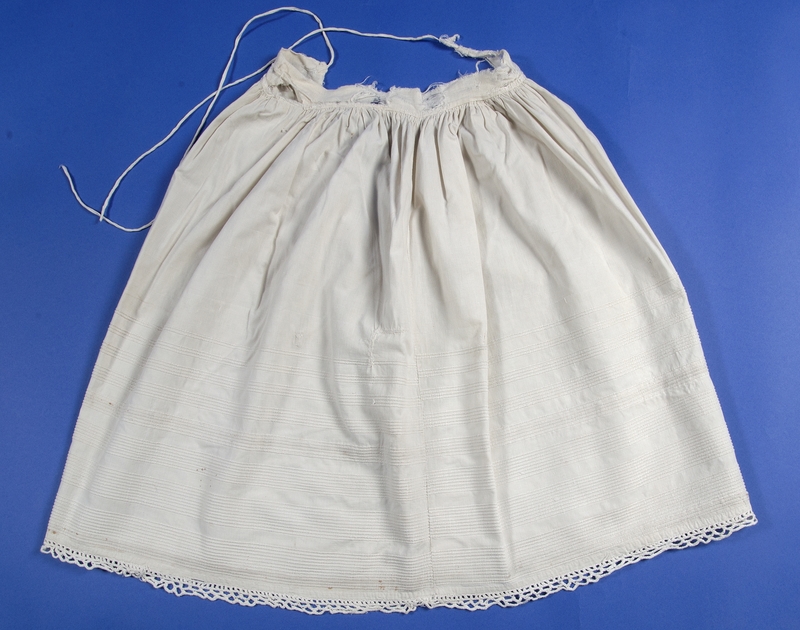 Corded cotton petticoat, date unknown. Probably belonged to
someone a little better off than a farmer’s daughter or clerk’s wife though… 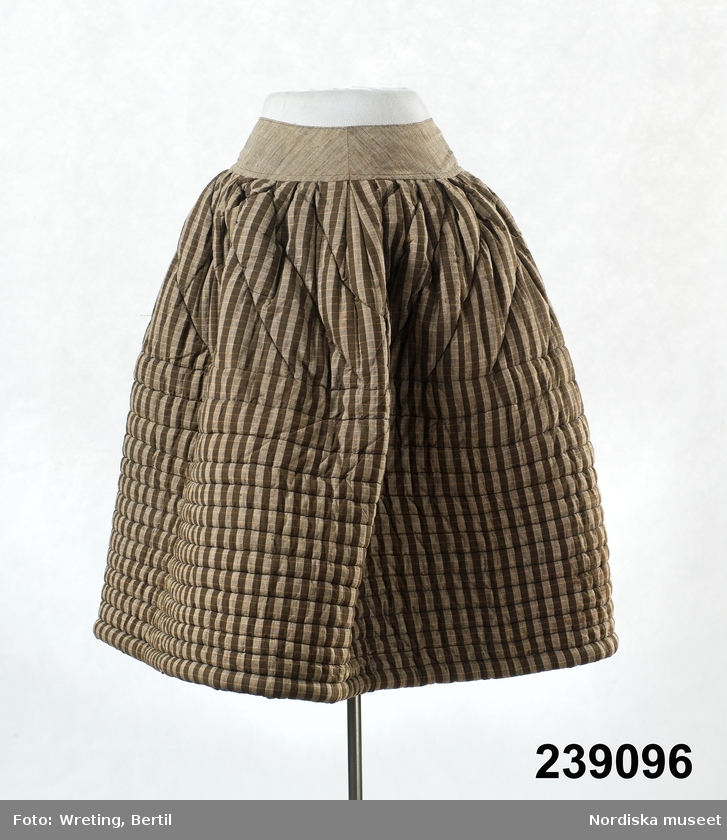 Quilted cotton petticoat, 1860’s.
There are stories of country girls making skirts hooped with cane, and several from the late 1800’s (when they were long gone from high fashion) are said to have found their ways to museums. Most petticoats seem to have been tied with tapes rather than buttoned (again, as in the painting above).
Again we see that the clothes worn by Swedish women of humble means during the 1840’s, 50’s and 60’s have many similarities with their more fashionable counterparts, and at the same time a few important differences. The most significant is perhaps that construction and material is more simple and sturdy than fashion dictated; but I find this plainness very appealing.