In December of 2008 I was going to a dress up party themed “Movie Characters”. For this some friends and I decided to dress up as various Disney girls. I made all the costumes; Belle (well, I’d made that one the year before), Briar Rose, Esmeralda, and Jane Porter. Now, at the time we didn’t take more than a few pictures that didn’t showed of the costumes very well at all, intending to take better ones later. That didn’t happen, and when I and two of the others married we moved away from the town we lived in, so I don’t have the possibility to make a photo shoot either. Ah well. 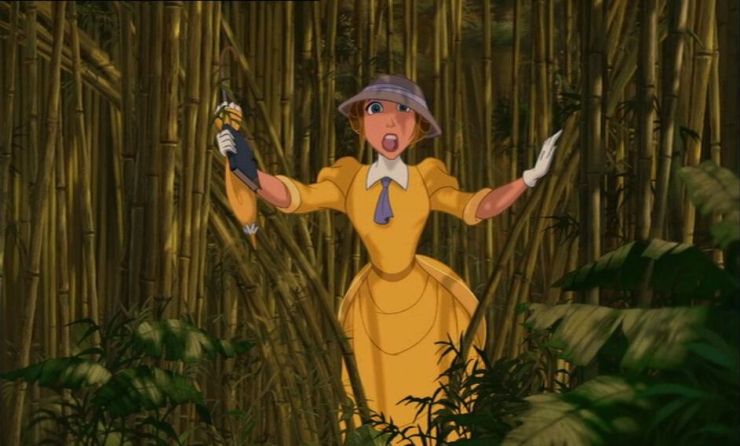 I did take some pictures of Jane’s dress the summer after. I have since planned to change a few details on the dress (add a better bustle and more petticoats for more poof, and altering the sleeves a bit) and take new pictures in a more interesting setting, but at first I couldn’t find the fabric, and then, what with being pregnant and now having little B, I haven’t been able to. So, since I don’t have much else to post about right now, I took some detail shots yesterday and am posting about it now, as it is.

The dress is the yellow bustle Jane wears when hacking through the jungle in Tarzan. I used 19th century-inspired construction and sewing techniques, but deviated a bit from what is period correct, as this is just a dress up costume.

The main fabric is a cotton blend jacquard with a leafy pattern which used to be curtains, bought at a charity shop. The lining in the bodice is plain cotton, light linen lines the sleeves and the draped sections of the skirt, and another linen fabric (slightly padded) trims the overskirt in the back. The collar and tie are also made from linen. The embroidered edging peeking out from under the skirt was once part of another charity shop bought curtain. It’s trimming a petticoat attached to the skirt waistband. I’m afraid it’s got torn at some point, but I suppose I can blame the jungle undergrowth for that…

The bodice front has two darts on either side, and closes with self fabric covered buttons and hand sewn buttonholes. The collar should be tacked on, but since taking it off for starching once, I never got round to sewing it back, and it’s only pinned on at the moment. 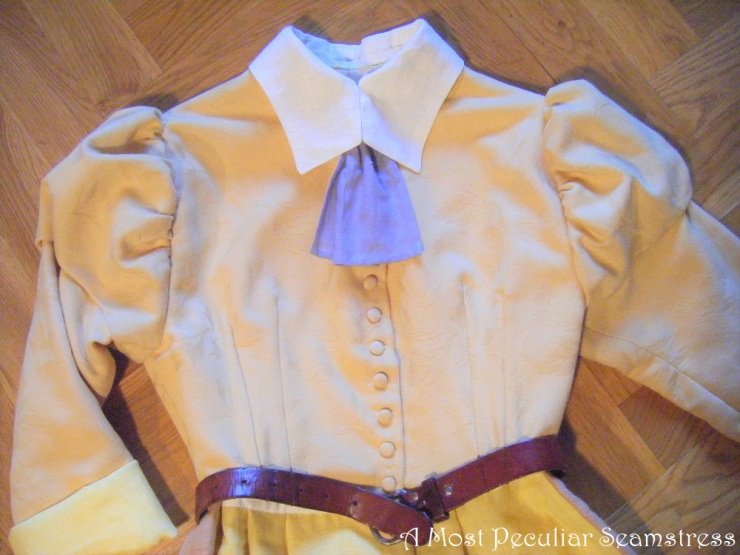 The back has shaped seams, and the bodice is boned with cable ties. The “polonaise” is sewn to the back of the bodice.

The skirt is cut to lie smooth in front, has deep cartridge pleats in the back, and has a draped ‘apron’ in front.

It closes with ties at the back. The closure is hidden by the polonaise on the bodice.

It has two sewn loops at the seam joining the skirt and waistband in front, which keeps the skirt and bodice from separating by two corresponding hooks on the inside of the bodice.

I also made boots for this costume. I bought a pair of second hand shoes, made the fake suede uppers and sewed them on at great pain and some bleeding. I also dyed a pair of tights lilac (hardly shows in this picture, though), as I couldn’t find any in that colour.

I wore the dress over a corset, a make-do bustle made from tulle (time and space limits in my suitcase prevented the making of a real one at the time), and a couple of petticoats. I had found short, white leather gloves to wear at the same charity shop that had the fabric and shoes. 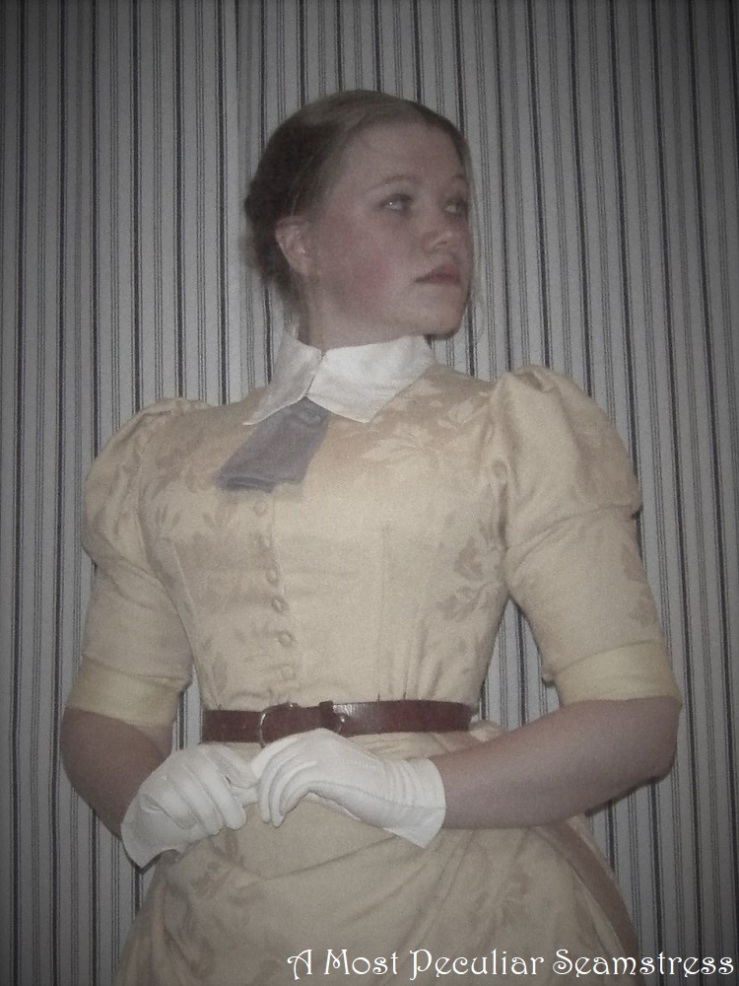