So, as promised, here comes my account of the event the weekend before last. It went very well for the most part, but I was in various degrees of pain for much of the time, most of it in my lower back, caused by the pregnancy. Luckily it didn’t lessen my enjoyment in the weekend all that much, though it was a relief to come home again. 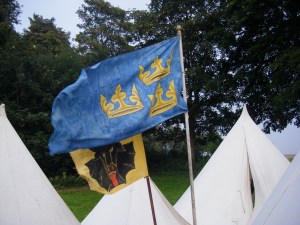 The location for the event was perfect, with beautiful buildings and big grassy grounds. As I said before, it had rained quite a bit during the week, so the grass was wet and the ground very soft when we pitched our tents in the dark late Friday night. We then had some pizza, stuffed our straw mattresses with, well, straw, and went to sleep. 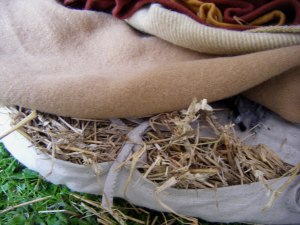 I must say I really like our straw mattress; it is such a difference from just folding a blanket around a bunch of straw, which slides away as you sleep. It also has the additional advantage of not getting straw in all your things. My sleeping badly and waking up with pains in my back and hips had more to do with the fact that I’m pregnant and generally uncomfortable right now when trying to sleep, than with any deficiency in the sleeping arrangements. 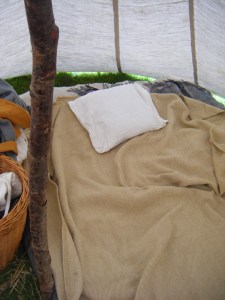 As we woke up Saturday morning, we gradually changed into our 14th century clothes as we made and ate breakfast; porridge with apple sauce, milk, bread, butter, cheese and sausage. Some of us also had a second breakfast of leftover pizza. 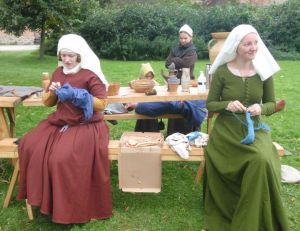 As the event opened, we were all fully dressed for the Middle Ages, all our 20th century items hidden away in baskets, carry sacks or in the cars, and occupied with some period craft, cooking or fighting practice. 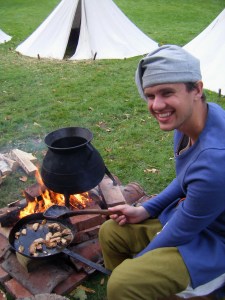 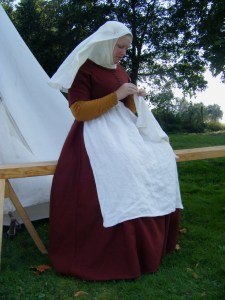 I, who could not help with some of the heavier chores due to contractions, spent my time hemming and marking a new towel for the company. They always seem to disappear, or getting worn out…. 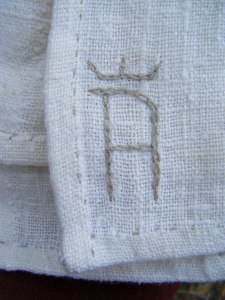 As I’ve said before, the aim of our group is to educate the public (as well as having a splendid time ourselves), and we had a couple of short lectures each day. One was on medieval wrestling and close contact fighting, with or without daggers or other things that could be used as weapons, like hoods and ladles. That one was a blast, even for me who don’t really care about that sort of thing.

The other lecture we had was on late 14th century clothing. I was one of the lecturers on Sunday, and we used most of the present group members outfits as examples of typical and varied details of dress. Fun, but didn’t draw quite as many people as the fight – no surprise there…. A few people were genuinely interested though, and came up to us and talked afterwards and got a closer look at materials, stitches, cut and colours. 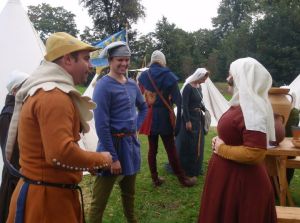 There were two memorable events during the weekend, both involving hand guns. The first happened the first morning; the program stated quite clearly that we’d fire guns at 11 am. Somehow, the knights had missed this, and also missed the calls made of shots going to be fired. Let me just say, that those guns are loud. The result was a horse getting loose, and running wild over the field. Ooops… Luckily, neither the horse, nor any person or property was damaged. The second was at another shooting exhibition. The recoil on the guns are apparently very strong – one of the guys was shooting, next second he’s looking down into his empty hands, with a puff of smoke hanging in front of him, and the gun lying on the ground a couple of meters behind him. Someone managed to get pictures of this, but regrettably I don’t have them. I did see it happen, though, and it was hilarious. A good lesson to everyone not to stay too close to fire arms… Of course, hand guns in the 14th century looked and worked slightly differently than in later centuries, or this would not have been possible… 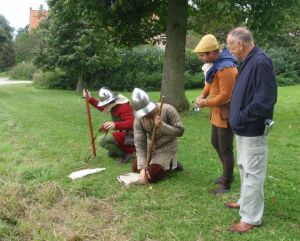 The rest of the festival was as you might expect a “medieval” festival to be, with nothing interesting for sale for the serious reenactor. However, if you were a five year old interested in polyester princess gowns and sequin maille, you were in the right place. We did, however, have a very good time, having set up our camp at a little distance from the rest, and having really nerdy discussions about the wages of hand gunners in the 14th century, period clothing, sewing techniques, food, armour and weapons. We made a lot of period food, which visitors were miffed not to be allowed to taste for insurance seasons. 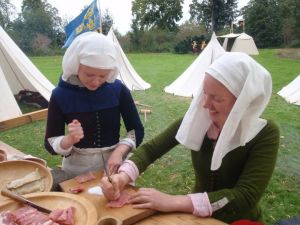 My sister in law made herself useful, and liked, by helping with preparing the food, and looking after the four year old daughter of one of the group members. She had a good time, and she looked lovely in 14th century clothes. It was fun to have her with us. 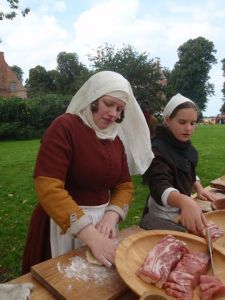 Now we don’t have any more events to attend this year – well, there will be a feast in December, but it’ll be about the same time as baby is due, so we’re not very likely to attend that.