For the two weeks before this one I’ve been home from work, with a fever and a cough. Last Monday, feeling a bit better, I went back to work, and was there for two and a half days before I was sent home on Wednesday, this time with probable tonsillitis. No one at work was surprised at this, as most new employees at the paediatric ward get ill frequently the first year or so, catching everything the children have. After a time, the paediatric nurses hardly ever take ill, no matter how many children cough, sneeze, and are sick or otherwise on them. I went to see a doctor today, who confirmed tonsillitis, and told me to stay home from work until my symptoms are gone. As tests showed it’s likely caused by virus, antibiotics wouldn’t help.

Now, there’re so many things I’d have liked to have worked on when I was home for so long, but for most of the two weeks I felt too poorly to do anything but sleep and play solitaire on the laptop. This time round, I feel pretty well, with a moderately sore throat and tiredness being my only problems so far. Baby seems to be doing just fine though, kicking and doing summersaults when I’m still for too long.

I did design and begin a maternity dress a week ago, but unfortunately the needle on the sewing machine snapped, and it was the last one I had. I still haven’t gotten myself to a place where I can buy new ones, and with all the period hand sewing, I don’t feel like making this one by hand as well. It’s on hold for the time being. The dress will be made from the plaid fabric, and in the design to the right, if you can see it in the picture. 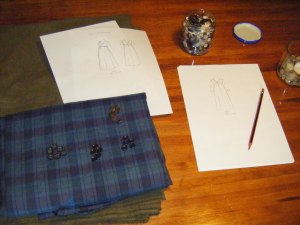 One happy thing though: when coming home from his night shift yesterday, Tobias had picked up a parcel with re-enacting things we’d ordered! New 14th century shoes for both of us, ten brass pins for my veils and wimples, as well as a few things we had offered to order for a couple of friends.

The first weekend of September will take us to our second and possibly last event this summer. Not that much, but when you don’t have the funds, or get time off of work, you have to be grateful for the events you can attend. We’d have loved to go to the Battle of Wisby that begins this weekend and goes on for the whole of next week, but I have to work. Sigh. Anyway, as I still haven’t finished the lacing and buttons/buttonholes of Tobias’ tunic, and my over kirtle is just half done, that’s what I’ll be focusing on as far as sewing goes in the near future – if my health allows.