So, dear friends and readers, I will give you a short and not so detailed account of the wedding. The pictures have been taken by my Mum, my good friend M, and my father in law. Since I don’t like to post pictures of people who haven’t given informed consent (whew, did I just sound like a nurse…), I’ll only post a few pictures of Tobias and I. 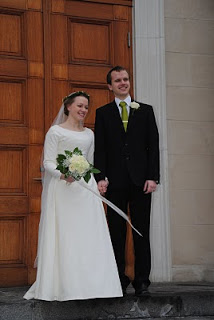 As you already know, the wedding dress (with petticoat and corset) and veil where made by me. I finished the dress the day before the wedding, with a little help from Mum. Well, finished is a loose term in this case. According to Swedish superstition the bride is thought to cry as many tears in her marriage as she’s sewn stitches in her wedding dress – those of us who make our own dresses claim that tears can be of joy as well as grief. If, however, you do make your own dress, it must not be finished on your wedding day, and that was easily solved by not finishing the seams on the inside of the dress. Saved me a lot of time too, which was good.

My sister L made the wedding bouquet and the boutonniere for Tobias, while I made the myrtle wreath, and put some baby’s breath (which in Swedish is called brudslöja, bridal veil) in it. I made my own hair. Since my hair, while long, is not very thick, I used a hair piece to add volume to it in the back. I had braided my own hair when wet the night before, to give it some body, and with a lot of teasing, hair pins and spray, it actually stayed in place all day. Wow. 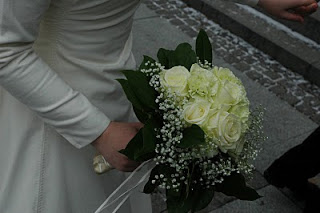 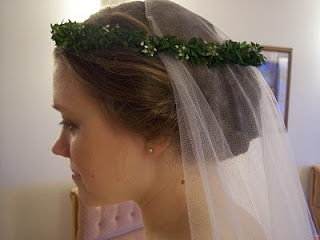 I was horribly nervous before the wedding, but that passed as soon as it began, and it was nothing but beautiful; we all cried and laughed a bit. In the LDS church we believe marriage can last eternally, not just “until death do you part”, and looking at Tobias, knowing he could be mine forever made me so happy I couldn’t stop crying, which made me quite a sight. He cried a bit too. Luckily we had limited the number of people attending to our parents and my sister L, and as they where as emotional as Tobias and I, it didn’t matter. After the ceremony we had a photo shoot on the temple grounds, and as it was below freezing it was cold. 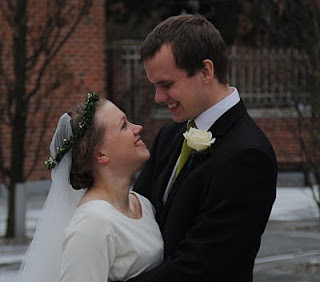 We had a simple lunch with our families (including all of our siblings and our grandparents), with a delicious mushroom soup made by a friend of our families (who acted as waiter with the help of his wife – thank you both so very much!), different kinds of pies made by our mothers, and then the most wonderful chocolate cakes made by my grandmother, who was regrettably ill, and couldn’t come. Our fathers gave short speeches, and when the tables where cleared away before the open house began, we had an improvised first dance to the music that were playing in the background. 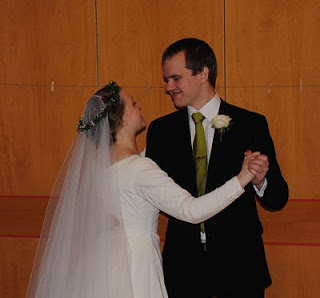 Well, to tell the truth, after the soup and pies, everyone where so full they couldn’t eat cake just then, so we took a short break, and went to have more pictures taken. Did I mention it was cold that day?? 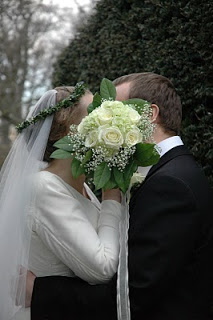 We had decided to have an open house, rather than a real reception. That way everyone could come and go when they wanted, without feeling rude to be late or having to leave early. It also made it unnecessary to have a fixed program, and made the question of refreshments much easier. So the only thing we provided where music and semlor (a kind of pastry consisting of a sweet wheat bun, cut in two, with almond paste and whipped cream in between and powdered sugar on top – google it to see pictures), that is traditionally eaten during this time of year. We served the buns, almond paste and cream on separate dishes, and let everyone make their own semlor, since most people have their own preference as to how much they want of almond paste and whipped cream. We also had a couple of rooms with games, movies and snacks for those children that might be bored with the wedding. It was amazing how many people came. We don’t have an exact number, but it was something around 200 people! Luckily we had enough semlor and lemonade to go round. Everyone appeared to have a good time, and didn’t seem to have any problem entertaining themselves – that most of them knew each other previously helped, of course.

And that was pretty much it – simple and delightful. I’m now married and looking forward to a long and happy life with my Tobias. So, even though I won’t change the blog name, I’m a Most Peculiar Mademoiselle no more – I’m a most peculiar Madame, with an equally peculiar husband (considering both our fathers brought this fact up in their speeches, it must be true).

24 thoughts on “Our Wedding”