The reading frenzy has passed for this time, and I’m sewing again.

Last night I finished my 18th century shift (dug out of the ongoing projects-box, half finished), after a couple of day’s intensive sewing. It’s made of fine, bleached linen, and sewed with waxed linen thread. No pattern was used, I just looked at all the pictures, and read all the descriptions I could find, and went from there. I had planned to add ruffles to the sleeves, but I like them as they are, so I won’t.

The shift is cut without shoulder seams, and width is added to the sides with gores, and with gussets in the sleeves. One of the side gores was pieced together from two halves, to save fabric – very period. All the seam allowances are folded in and sewn down, so that they won’t ravel when washed.

The fully boned stays (known as a corset nowadays) were made several years ago, and are a bit too large. They’re comfortable and give me close to the right shape, so they will work for now, but the new ones will be smaller. I’ll keep these though; I might (sigh) grow into them in the future. They’re made of cotton twill, and bound with cotton bias tape (so the materials aren’t period either), and completely hand sewn. Perhaps I’ll cover them in another fabric in future, and then they’ll look period enough. 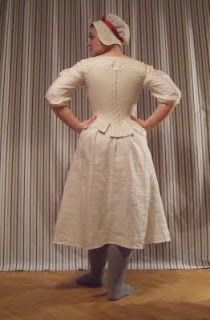 It’s a bit of a project to lace myself into them; I can’t do it without looking in a mirror. My new ones will probably have front lacing as well as back lacing. Not as common in the period, from what I understand, but much easier to lace oneself into. I used a 1/8 scale pattern I got from one of my teachers in high-school, that I scaled up and changed to (hmm, somewhat) fit me. No idea how period the pattern is, but since I’ll never walk around in public without wearing clothes over my stays, they’ll do. The 18th century is not a period I usually do, anyway. Oh, and we all know what a push-up effect 18th century stays gives…. I exhaled in all the pictures so I wouldn’t look downright indecent. I have no intentions of showing of my eeeh… assets to the world. When I’ve finished the whole costume I’ll definitely wear it with a fichu tucked into the neckline for modesty. 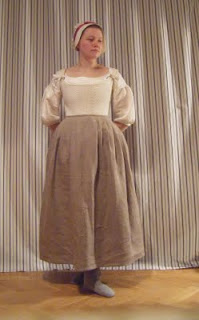 The under petticoat was sewn a couple of years ago, and is made of a coarse, unbleached linen. Very simple, but the outfit I plan to make will be lower middle class at the highest, so I think it’s all right. It is mostly hand sewn. The front and back are pleated to two separate waistbands; the ties of the back waistband are tied in front, and then the front ones are tied in the back. This is a period way to close petticoats, and makes them very easily adjustable in case of changes in waist measurements, due to pregnancy, weight gain/loss, or a new pair of stays.

Now I have the underpinnings done, I’m really looking forward to making the rest of the clothes. I’ll need a pocket or two, an outer petticoat, a jacket, an apron, a more period correct cap (for the pictures I just took one I had lying around), and a pair of knitted stockings. The stockings are nearly done; I just need to find the inspiration to finish them. I’d like a straw hat and a pair of period shoes as well, but I won’t be able to afford that for a long time. Never mind, I don’t really have time to work on this costume right now anyway….