Last night I had the night shift, but I didn’t sew on the wedding dress as I’d planned, not having cut out the tulle yet. I really, really must do that tomorrow! Instead I brought a couple of small projects that needed to be finished. It turned out they were both much closer to being finished then I’d thought, so it didn’t last the whole night as I had planned. Usually I don’t do sewing, or knitting or anything of the sort on Sundays, it being a day of rest. But trying to stay awake a whole night, while just sitting in a sofa most of the time is hard, and it also being a case of patient security, I decided to make an exception. If my hands are busy, it’s much easier for me to stay awake. 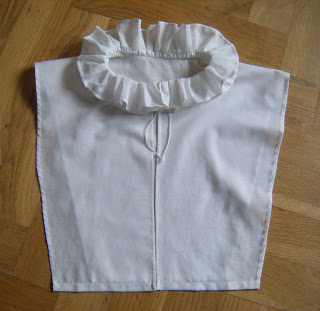 The first project was a regency chemisette, based on the ones in Janet Arnold’s Patterns of Fashion 1, for the day in the future when I make myself a regency outfit. I started it two years ago, but it’s been forgotten amongst all my other projects. It’s all hand sewn, with really tiny stitches. It took close to forever hemming the two frills at the neck. It closes with braided ties at the neck, and with a drawstring at the “waist” (just under the bust), which I haven’t added yet. I’m very happy with how it turned out, and my Mum, who laugh at most period fashions (at least most fashions before the 1800’s), like the look of it very much. Perhaps her having seen and gotten used to them in Jane Austen movies helped. Not that most regency movies use neckline-fillers the way they should…. why is it so impossible to do things right? Anyway, it’s nice to have her think some period clothes are pretty. 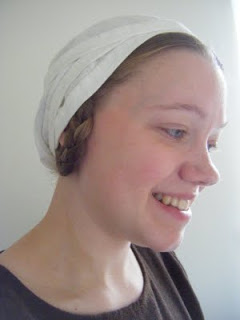 The other project I finished is my second version of the coif inspired by the one of St Birgitta. I didn’t like how it turned out the first time. It’s made in a rather coarse bleached linen, with the two halves sewn together using a simple sort of interwoven herringbone stitch.

The original had a much more complicated, and beautiful stitch, but I kept it simple. After all, I don’t portray a noblewoman, as St Birgitta, called Fru Birgitta during her lifetime, was. (I hope I get this right; the title fru in Sweden during the middle ages was only used for noblewomen, royalty and the Virgin Mary. Though it’s not often used anymore, fru in our day means a married woman of any level in society.) The coif too is hand sewn, with waxed linen thread, as with most of my medieval clothes. It has 13 small tucks on each side of the center back, to make room for the hair. The band at the edge is sewn together, to make a long, unbroken round. This is wound round the head, and keeps the coif securely on the head. I like it very much, it stays on and it’s comfortable. If I want to I can pin a veil over it, for a more dressy look, or just to protect me from the sun.

So, though I didn’t work on the wedding dress, I’m still rather pleased with the sewing I actually got done.

4 thoughts on “Chemisette and Coif”