While most Scandinavians love the sun – not surprising in a place where it’s dark much of the year – I prefer staying in the shade. I burn fairly easily, and the strong light has given me headaches since I was a child. Unfortunately, one has to venture into the sunshine every now and then, and finding a good sunhat is no easy task. I usually wear my hair up, as I grow impatient with it when it’s down (not to mention how hot it gets when it’s already warm out), so ordinary sunhats won’t fit on my head. I was made aware of low crowned, wide brimmed bergère style straw hats being sold at a reasonable price in a perfectly normal clothing store here in Sweden, so I ordered one, hoping it would work well for an everyday sunhat now, and for historical hats in the future. When it came I was quite happy with it: real thread rather than plastic, the eyelets for the ties were stitched not riveted, which will make them easy to hide with trim, and the synthetic Petersham ribbon was stitched rather than glued, making it easily removable. 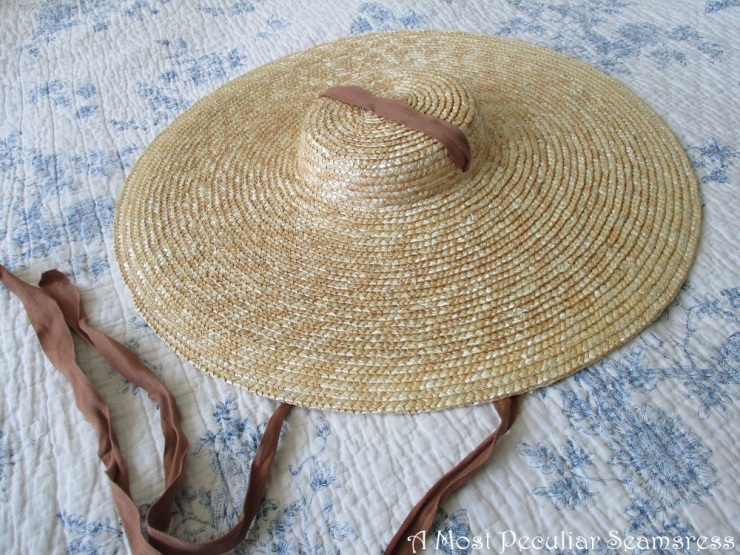 The hat is very wide brimmed however, and at first I was not sure how to deal with it. I didn’t want to unpick the straw braid, in case I want to use the hat for, say, a silly mid-19th century sunhat sometime: I can’t afford to buy another one. In the end I decided to keep it as is. I chose to remove the brown cotton twill tape (it went straight into my stash, awaiting future projects) and used a cotton twill tape in blue instead. Brown is probably my second favourite colour, but straw hats with blue ribbons are just one of those things I love the look of, and blue is always blue. 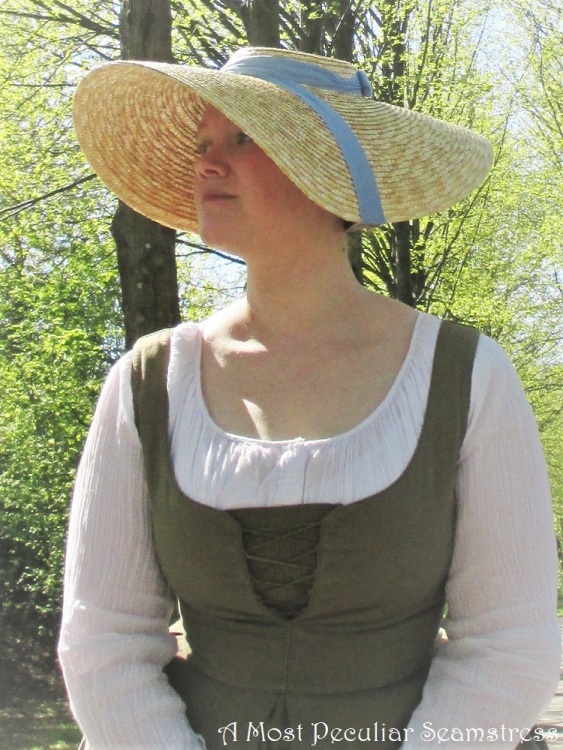 The tape wraps around the hat, crossing in the back, and is stitched down in strategic places to stay put. This makes it possible to put it on without having to bother with hair getting caught in a bow when tying it. As the hat brim is striving to return to its flat state, it creates just enough tension to keep the hat securely in place, even when it’s a bit windy. It’s more than a bit 18th century inspired, but I do like those shepherdess straw hats, and it goes rather well with my everyday style – here my Cinderella dress. I’ll admit that they look better from the back when worn over big 18th century hair, or caps. The wide brim provides great shade for my eyes though, so I’m very pleased with that.

I lined the crown with some blue cotton plaid that matched the ties nicely, to prevent the straw from snagging my very fine, easily ruffled Nordic hair. I’d have liked a crisp white lining, but in the summer heat, white doesn’t necessarily stay crisp for long.

I do get a few looks when wearing my bergère style sunhat, but what else is new? One of the teachers commented on how I always look so nice when picking up my second son from preschool, and I’ve had others note my clothing too, so hopefully the greater part of the people I meet think so – though perhaps in a most peculiar  madame kind of way rather than a fashionable one 😀

6 thoughts on “A Bergère Style Sunhat”