So I had a little more to post about the Harry Potter party, but was a bit burned out on the whole thing. Now finally, here it is.

It would be a sad magical home that did not have potions and ingredients for making them. I had a very limited budget for this party, so I couldn’t invest in bottles and jars in cool shapes, but had to use what could be found at home. Luckily it had been a while since I disposed of the glass recycling, so I could find quite a few acceptable (though not great) jars and bottles there. 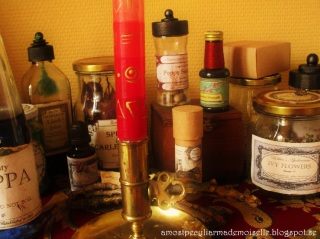 I removed the labels from all my glass containers. I then designed new ones for them, using labels I found on the internet as a starting point, and edited them in Paint – basic as can be. 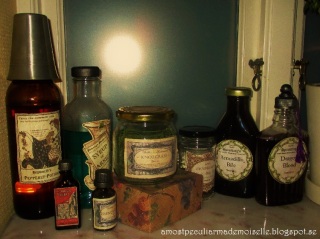 Some of the names of apothecaries, potions and ingredients are found in the books or films, but some I made up. I tried to pick things that might reasonably be found in your ordinary wizarding home, so there was no Polyjuice Potion, Felix Felicis, Amortentia or similar to be found here. For volumes and weights I used the old imperial units, as wizards did not convert to the metric system when the rest of the UK began to do so. Also, I didn’t age the bottles as much as you often see done for Halloween, as I wanted them to look like they are in regular use; a bit stained and with torn labels, but not completely dusted over and covered in cobwebs. 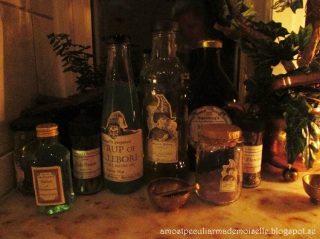 As for the actual content of the jars and bottles, I used several things. I began collecting and drying plants in June or July. Some of them were historically thought to have magical or medicinal properties, and some have proven medicinal uses. That makes it extra fun. Others just looked so cool or weird, I just had to add them, either under their own, borrowed, or made up names. Some of them I later found listed among potion ingredients in the Harry Potter world. 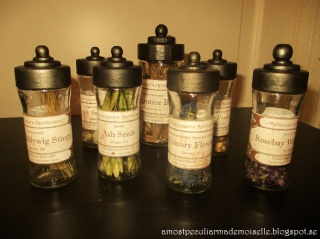 I also used shampoo, coloured water (in some cased thickened with potato starch), coloured sugar, and similar things to give different effects. For the more interesting jars I put in toy lizards, borrowed from my eldest son, real eggshells (left over from cooking) that I had dyed several times to give them an interesting pattern, and a dead beetle I found outside my house last summer. That last one is a bit creepy, but it did add to the look.

To decorate the windows I made some undefined kind of plants (not devil’s snare – that’s decidedly not a plant you want to have in your kitchen) using brown packing paper – left over pieces from making dress patterns – as a base. I wetted it, crunched it up a few times, then twisted it into shape, let it dry and painted it. Then I wrapped plastic vines (originally used to decorate for our wedding reception) round them, and tacked them to the walls and roof. I “planted” them in copper pots – every true Hufflepuff will know that both plants and copper is seen a lot in the Hufflepuff common room, so it’s a nice nod to ”my” house. Go Badgers! 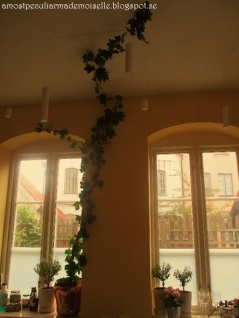 I also made a small hothouse in a glass bell jar.

We hid our fridge and freezer behind drapes, as they just looked too Muggle to bear. They are suck typical places to stick notices to, but I stuck ads, coupons and the like – all with a mundane but magical theme – to a permanently closed door. These would-be cut-outs were a mix of me altering some picture or other, in a similar fashion to the labels above, and using pictures found online as they were. 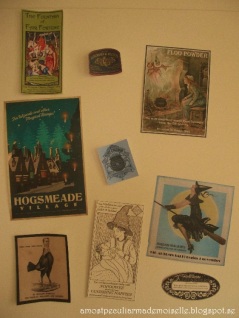 It looked nice enough, but I think I’ll eventually need to get a proper notice board – a pretty one. 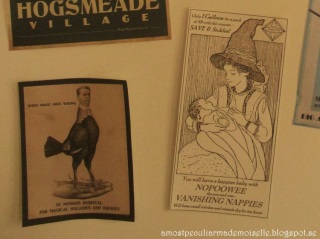 Because naturally you just have to have one. I hope to find a really realistic one some time, but until then this one will do. I’d want a cage too. Ornamental cages seem to be a home decorating fashion right now, so I should hopefully be able to pick one up for next to nothing once the fad passes,

and people are sick of them cluttering up their storage. 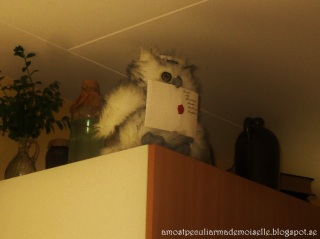 I also put books, goblets, jars, cauldrons, quills and other odd stuff on top of the cupboards, for visual interest. Both me and hubby being nerds in several areas makes finding such items around the house a simple task.

And that was the last post on this subject, promise. At least for this year.

4 thoughts on “A Harry Potter Halloween II: Other Decorations”