Lauren of Wearing History wrote an inspiring blog post the other day, about how many of us put the best light on things, while toning down, glossing over, or failing to mention that which is not so good. This, while perhaps rather innocent in itself, might lead some people to think that our lives, skills, homes, families and projects are picture perfect, while theirs are not. It’s far too easy to compare our own weaknesses with someone else’s strengths, or to compare our periods of trials with others’ periods of happiness. Hardly a fair comparison.

Lauren issued a challenge to other bloggers, to share the “behind the scenes” stories of some blog posts, to show that none of us are perfect.
I have actually blogged a bit about feeling unhappy, but have tried to tone down that part lately, as I want the blog to focus primarily on my projects and events, and not so much on my private life. As this is for a good cause however, I will share some of my stories.
When these were taken back in 2009 I was going through a depression of a kind that would have made the young Marianne Dashwood proud; it was so spectacularly pathetic, and yes, a young man was the cause. I’m still embarrassed about it – not the depression (that is nothing to be ashamed of), but the reason for it. Going to pieces so completely over someone who had never encouraged me in the first place was silly. We would never have been able to make each other happy, I’ve been able to see that for a long time now. Anyway, sewing and dressing up was one of the most important things that kept me on my feet, and pulled me out of bed every day. 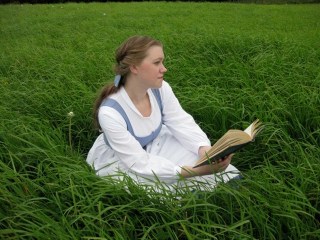 A year and a half later (beginning of 2011) and things are lots better: hubby and I got married. But there is always something to prevent things from being perfect: my sister that died a few years before wasn’t there. The fabric my dress was made from had her name – remembering my sister even on my wedding day. Also, my dad had been ill for years, and had to endure some pain to attend our wedding. He’s still not recovered. Granny got ill and couldn’t come at all.

Summer 2011 and I am happy, pregnant with our first child. But only a few weeks later, I would have a nervous breakdown at work, probably triggered by pregnancy hormones, and having to do a procedure on a child that I remember my sister dreaded when she had cancer. I couldn’t go back to work for weeks, and then only half time, until I went on maternity leave. I went to a counsellor and talked about my sister, her illness and death, what I’d gone through: topics I had avoided for years. It was tough, but I have been much better since, and the subject is no longer something I shy away from. 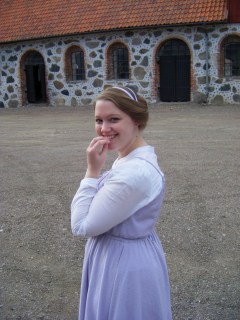 Beginning of 2012. I’m a new mother to a lovely, sweet baby – but only just recovering from being very tired from blood loss, and in so much pain from birthing injuries – partial rupture – and from breastfeeding being tricky – it took three months of blood, sweat and tears to get it to work properly. Thank Heaven it went so much smoother the second time, both giving birth and breastfeeding!

Not all “behind the scenes” stories are that serious though – most are of much less impact, some a lot more amusing. Here are a few:
Empire/Regency stays photo shoot. Hubby was away, baby was asleep. For a bit. In the middle of the shoot (camera on self-timer) he woke up, and I had to blow out the candle and dash. Ever tried to cuddle up in a springy bed, nursing a baby, while wearing a wooden busk? Not comfortable. I had to whisk it out, nurse baby back to sleep, put it back in, and continue the shoot. Also, I didn’t yet have a proper early 19thcentury shift. 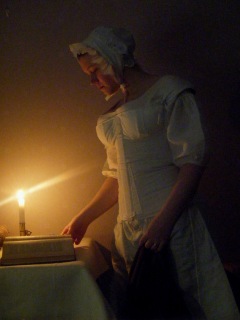 Taking pictures of my new short gown. In lieu of a petticoat: a piece of raw silk fabric, tucked in a belt.

New cap, trimmed with silk ribbons. Only, I could not find all of the ribbon, just enough to trim one half of the cap – the other side is quite plain…. That little detail was remedied before I used the cap at an event though.

Hobbit photo shoot. If I hadn’t gone through all the trouble to have my hair curled, and carrying all that stuff up two flights of steps from the kitchen, turning my sewing room into a hobbit larder, I would never have done it that day – the children were notco-operative, which stressed me out. A stressed mum is a bad mum, and getting worked up over a silly photo shoot felt wrong.
For the other pictures in this post, both boys were sitting by the window, having a laugh looking at me running back and forth, setting the camera, and posing.

The point of these blog posts that are sprouting up now, are to show that we’re all human. We all go through hard times, and can always use encouragement. We have to be kind and considerate when we comment on other blogs – even the most dazzling smile might hide fatigue, stress and grief, the most amazing outfit might have several failed attempts or mistakes behind it. A less than successful attempt at a period dress is still better than no attempt – we all started somewhere. If putting other people down make us feel better, then perhaps we ought to take a good look at ourselves instead of others for a bit.

8 thoughts on “Social Media: the Myth of Perfection – and the Reality”