I  posted about Swedish common women’s dresses a while ago, and about their underwearsome time later. Now it’s time for accessories. This is the tricky part. There are several dresses in museums, but not many photographs, paintings or drawings showing what they would have been worn with, at least not that I’ve found. In many places in the country some form of folk costume was still in use, at least partially, and some elements of this older way of dress were still present with these dresses.

Important to note is that Sweden is a very long, though not very wide country – from the South to the North there are about 1572 kilometer (977 miles), most of it covered in woods, that back in the days, before the train, were very difficult to travel through. There were significant cultural differences between the different parts of the country. This naturally had an effect on dress (especially the details), and I can’t possibly cover it all in one post, even if I knew more than I do (which is little), so don’t take this as exclusive truth for all of Sweden. It’s nothing more than a scratch on the surface, really…
As mentioned in my last post on this subject, at least the country women would, as a rule, have been wearing an apron at all times, even to church and weddings. Aprons were often woven from wool and/or cotton in thin vertical stripes (though horizontal stripes and solids are not exactly unusual), but silk and printed or fine embroidered cotton could also be seen – of course depending on occasion, place, person etc. Ties and/or waistbands could be made from woven ribbons (plain or with fancy patterns), self fabric or another fabric. They seem often to have been tied (or sometimes hooked) at the side, or off centre front, not in the back. 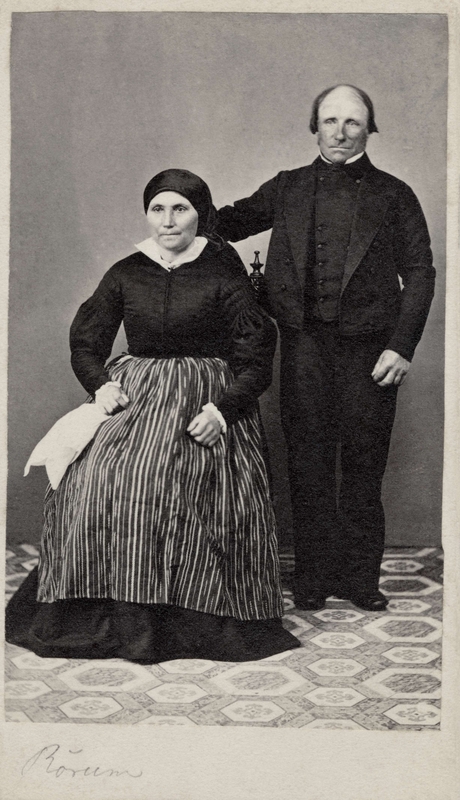 Farmer couple from the county Scania (Skåne), ca 1860-74.
She, very typically for the time, is wearing a combination
of fashionable dress, as interpreted by country folk,
and traditional elements like the apron and kerchief. 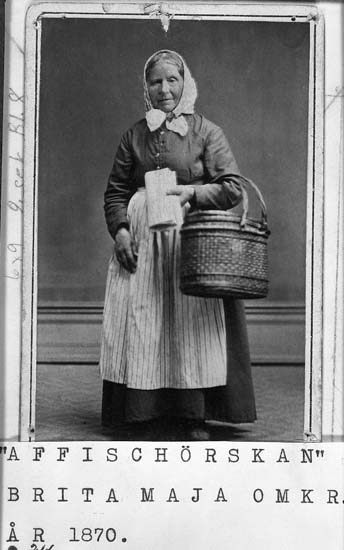 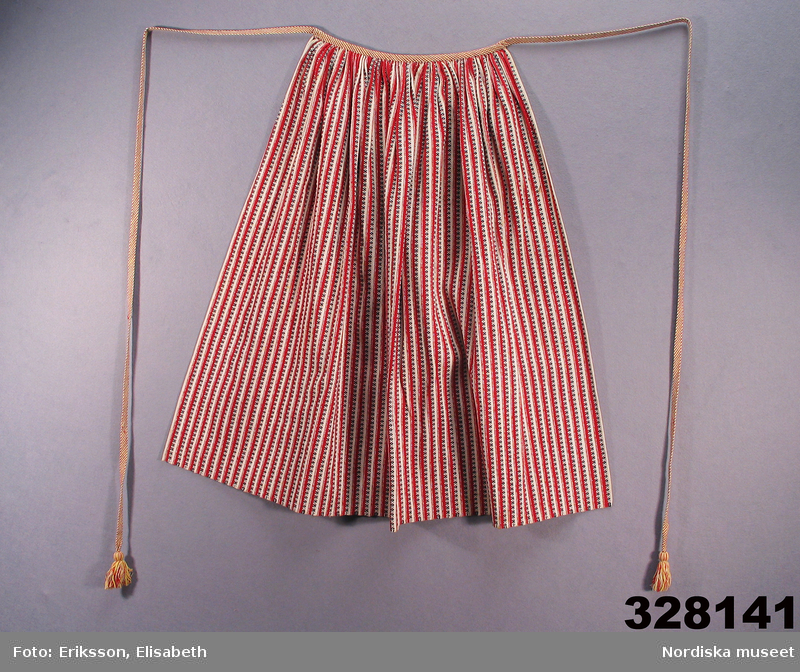 Hand woven cotton apron, ca 1865-74.
The very long ties are meant to tie in front.
The selfedge of the fabric is at the top and bottom of the apron. Skåne. 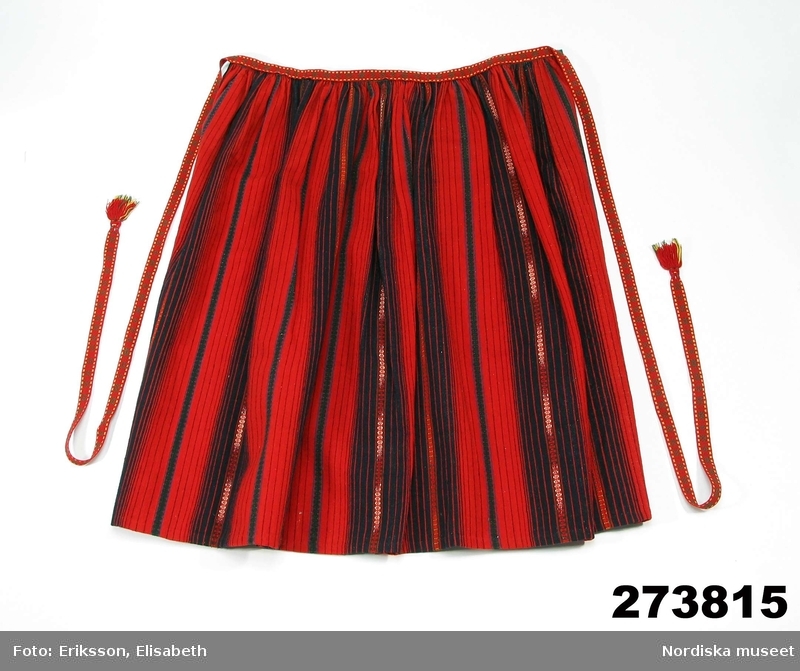 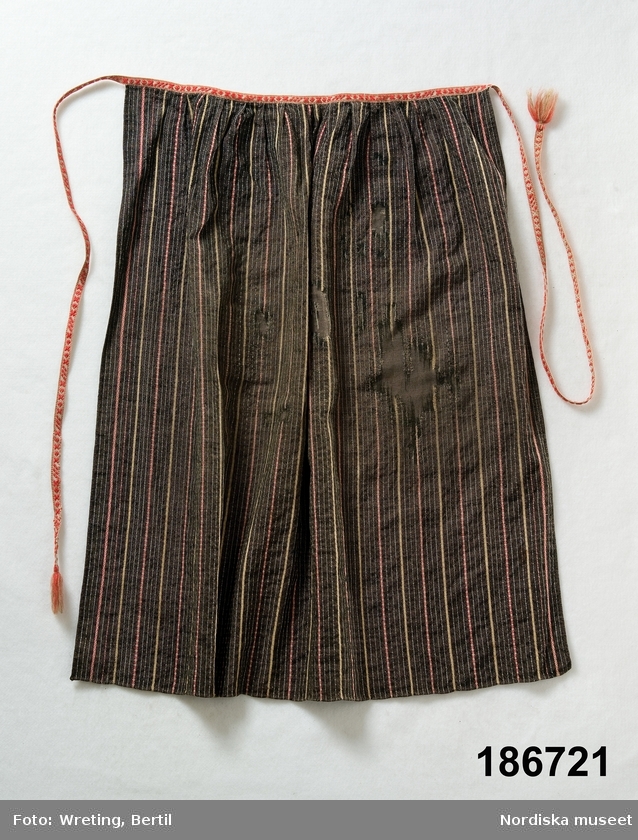 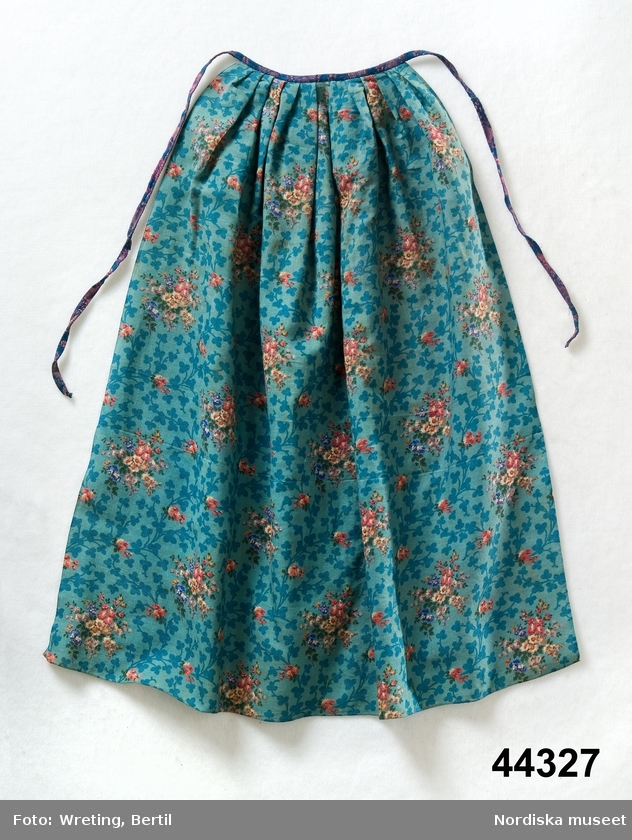 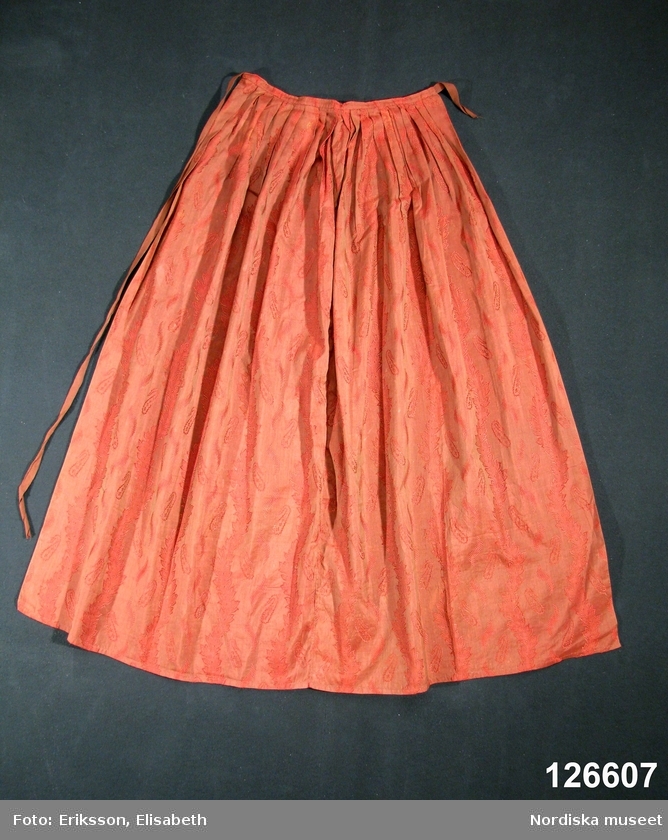 Cotton warp, silk weft, ca 1840-70. The apron is ment to tie at the left side,
thus the uneven lenght of the ties. The fabric is only 50 cm wide,
so two panels are stitched together. Västmanland.

A neckerchief was common in many places, of woven wool or cotton checks or cotton print – possibly silk or cotton lawn for best. I heard that neckerchiefs and aprons were also used by common town women for everyday, but have only found a few good primary sources, all drawings. 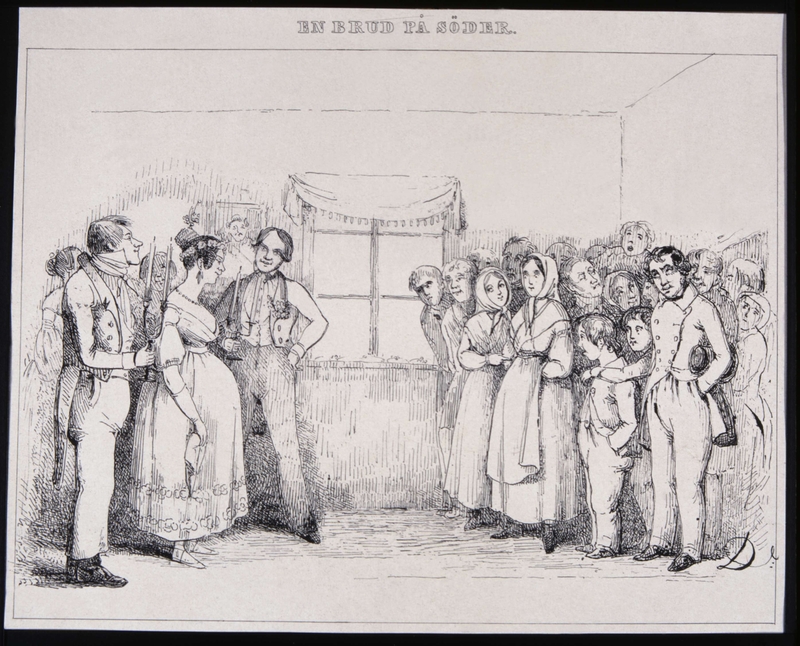 Brideviewing in a humble part of Stockholm, late 1830’s/early 1840’s.
Aprons and kerchiefs at neck and head on the women in the crowd. 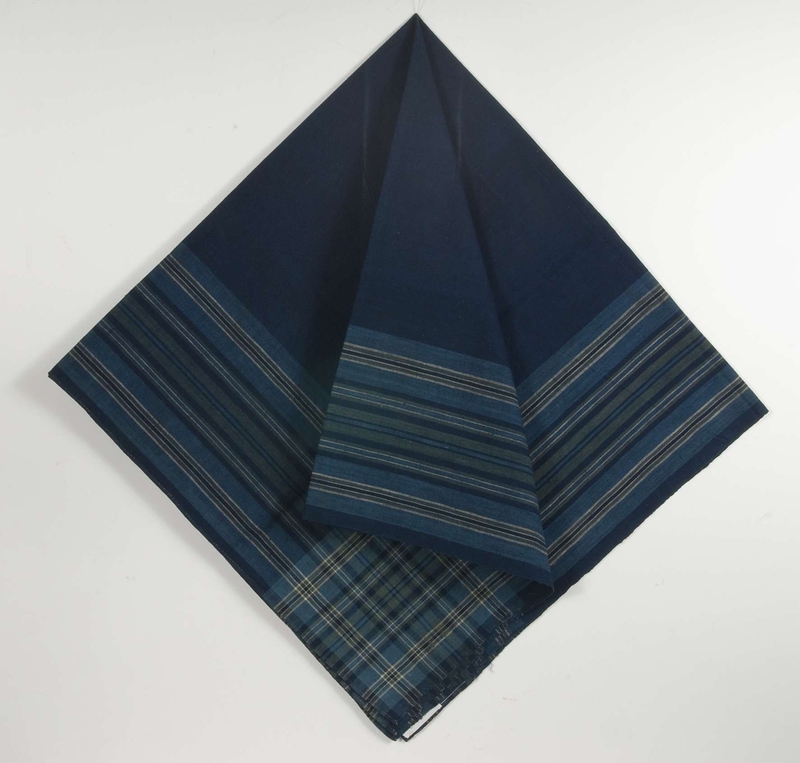 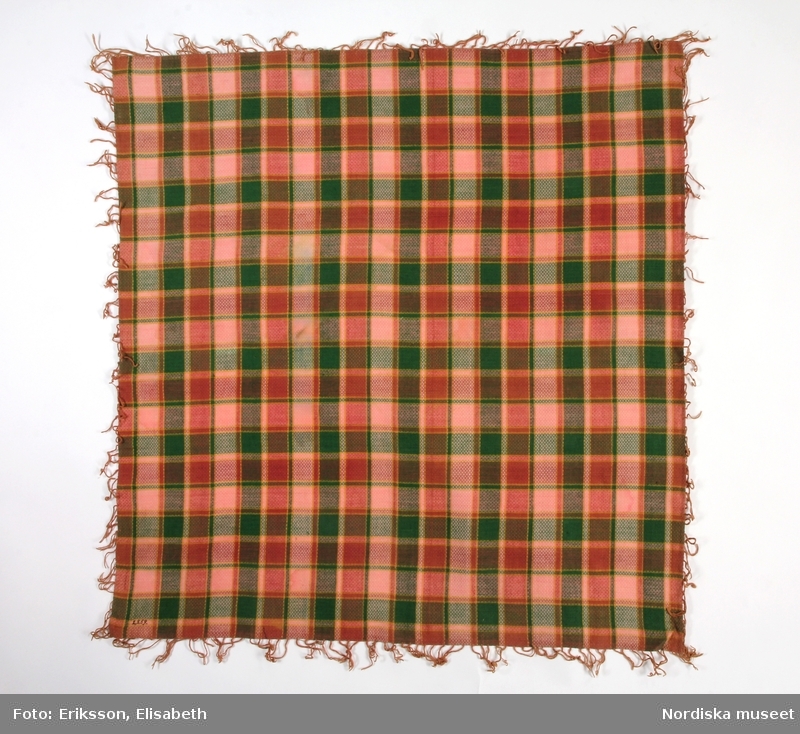 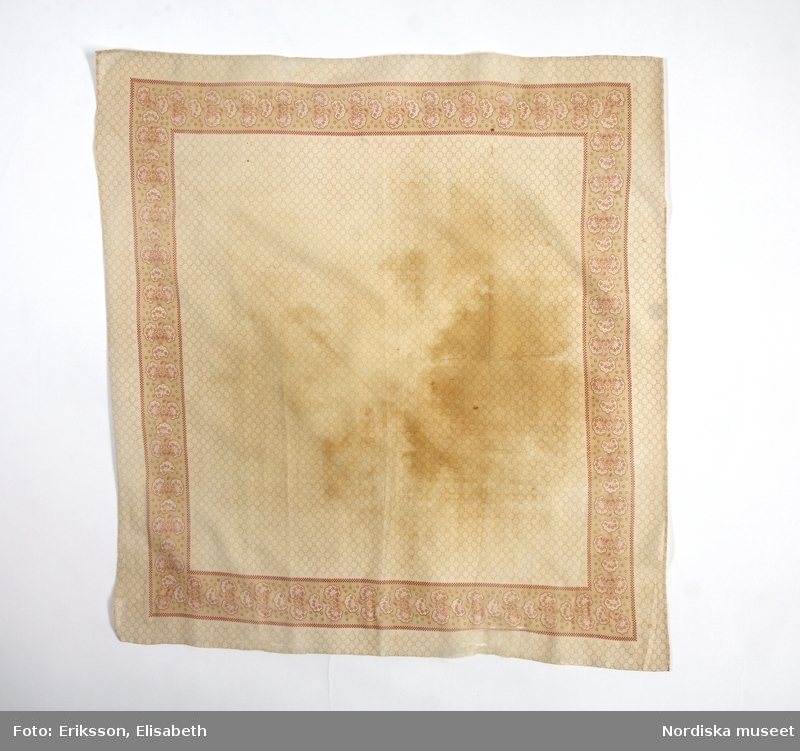 Printed cotton neckerchief, ca 1840-60. Unknown provenance.
Something was also worn on the head; and here what part of the country you lived in truly matters. In many places a sort of papier-mâché cap covered with silk, bindmössa, with lace framing the face, stycke, a left over from the 18thcentury, was worn. 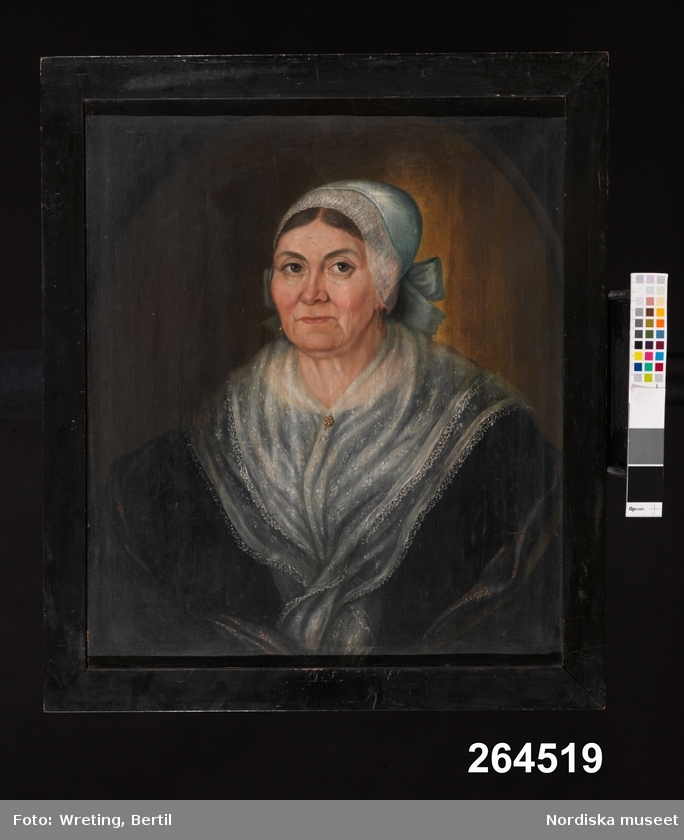 Older woman in bindmössa and neckerchief, 1841.
Several extant bindmössor here.
A kerchief tied under the chin was worn over it outside. I’m sure there may have been more varieties of headwear in our country, but I’m mainly interested in the far south of Sweden, Skåne, as this is where I’m from. The bindmössor mentioned above were not worn here, but different kinds of huge, white linen headdresses were traditional for married country women’s finest. 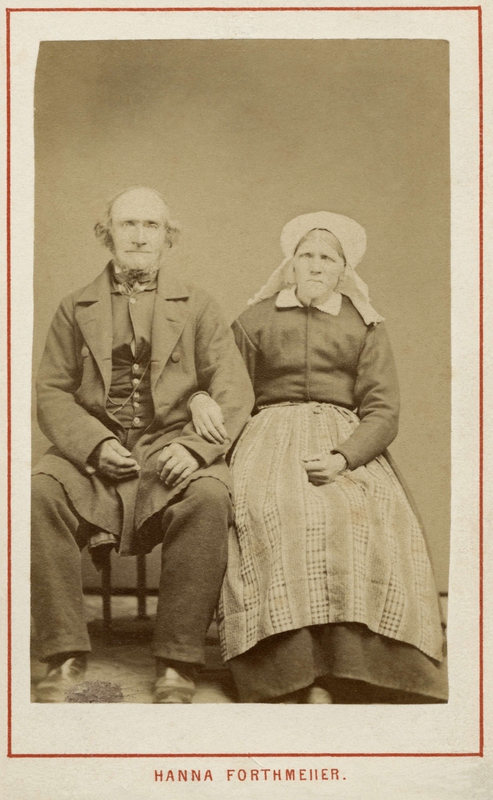 Farmer couple, woman in dress (and a jacket?), apron and and an example of the
married woman‘s  white headdress, klut, ca 1860-65. Skåne. 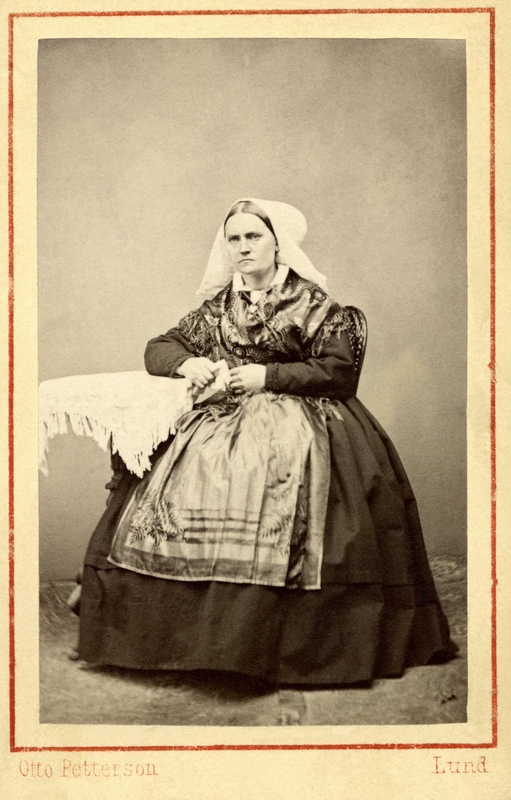 A woman in transitional clothing, with a dress influenced
by current fashion, silk apron and kerchief and klut, ca 1870’s. Skåne.
Coloured, checked cotton kerchiefs were worn by most women for everyday and smaller festivities, tied at the nape of the neck or under the chin. Again, I’ve heard (but have no primary source) that common women in the towns often had their heads uncovered indoors, and depending on wealth, would either wear a kerchief or possibly a bonnet when going out. 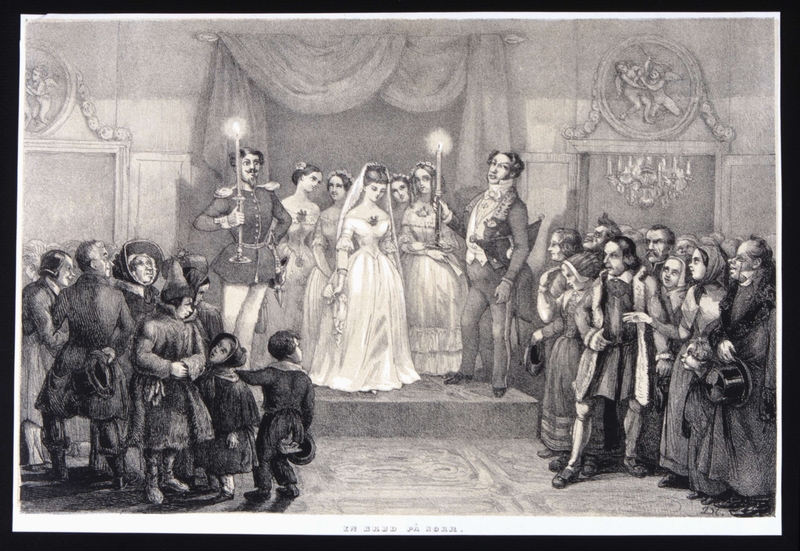 Brideviewing in a more posh part of Stockholm, late 1830’s early 1840’s.
Bonnets, caps and kerchiefs can be seen on the female onlookers. 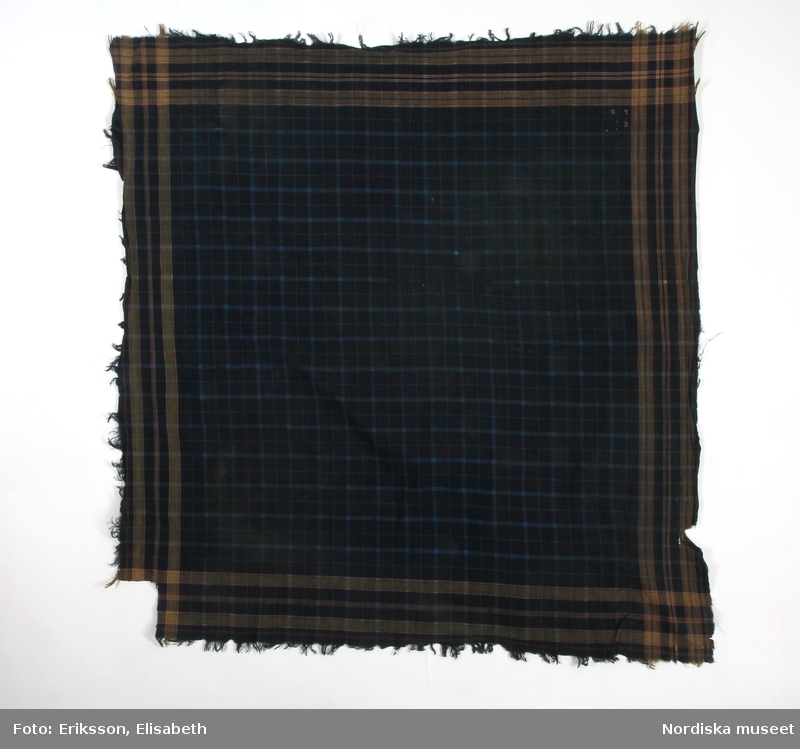 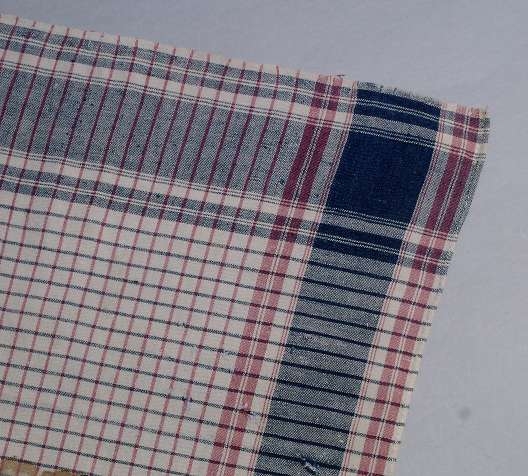 Linen headkerchief, uncertain date. Skåne.
The difference between kerchiefs meant to be worn round your neck or on your head eludes me – perhaps there were none? In museum collections they are often named both, to be safe.
Short jacketsseem to have been common as outerwear, at least for country women. Their details differed slightly between different places in the country, but the basic type is the same: black or dark blue, often home woven wool, tight fitting, round or square neck, closed in front with hooks and eyes. Some have a small basque, or a point in front, but most are cut off straight at the waist. Wool shawls can also be seen in drawings.

“Avskedspredikan för emigranter vid Tullpackhuset” –
”Farewell sermon for emigrants by the Customs House” by A. G. Hafström, probably late 1860’s.
Jackets and shawls can be seen, as well as aprons and kerchiefs. 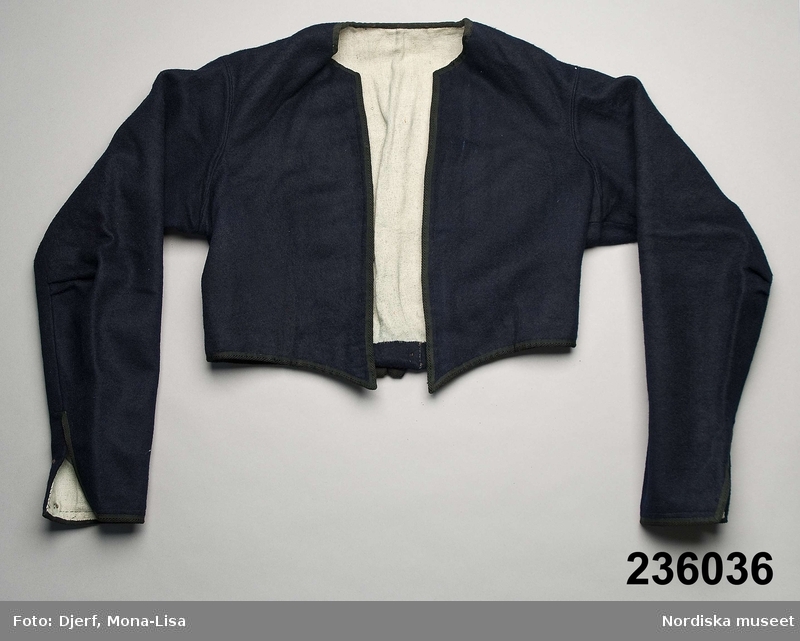 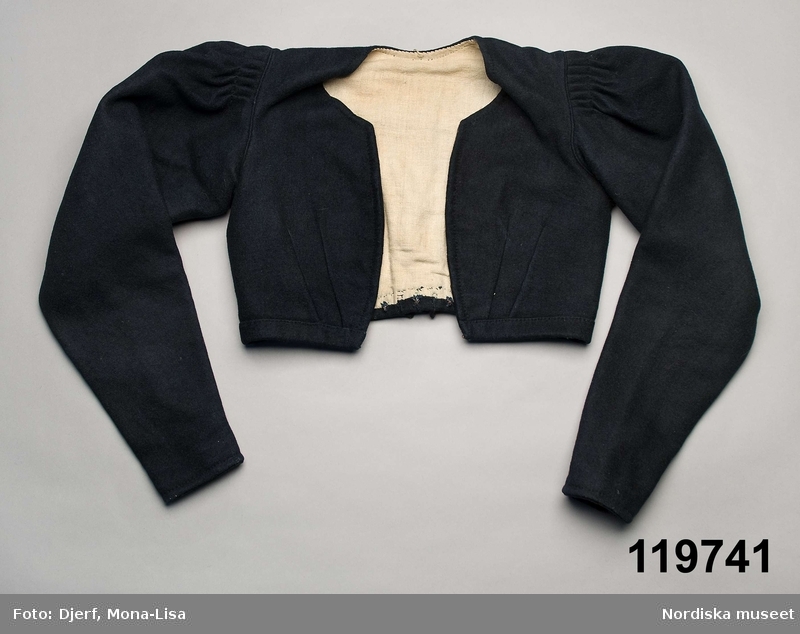 Dark blue wool jacket, ca 1830-40. (I believe it might be later,
as I’ve seen that style of sleeves in common women’s
jackets much later than was fashionable). Skåne. 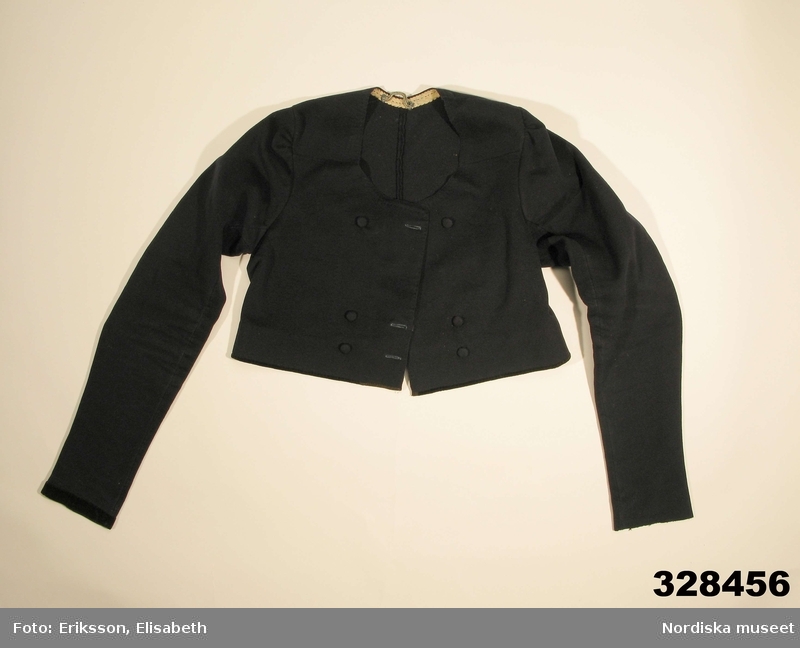 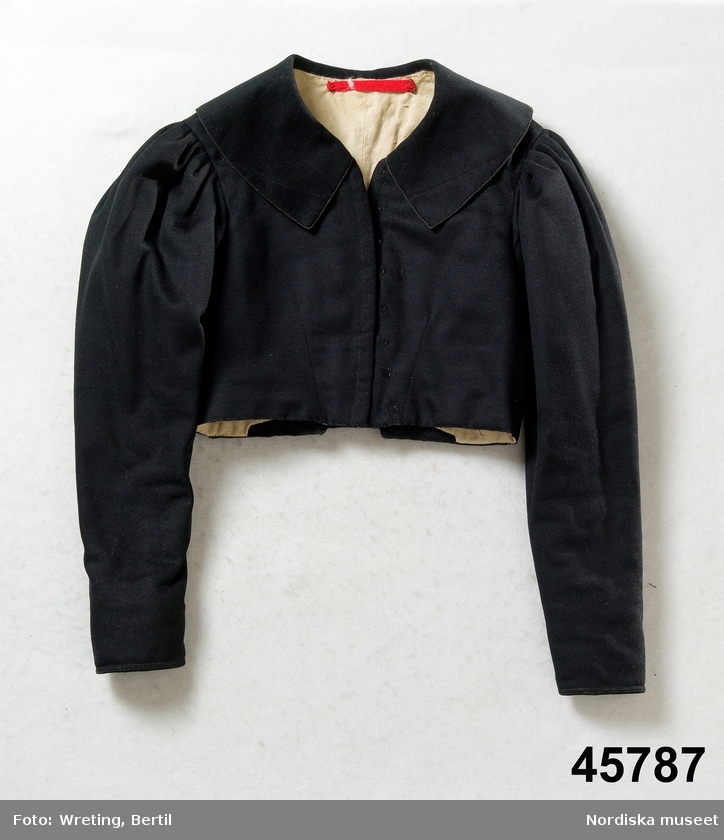 Black wool, ca 1830-45. County Närke.
Shoes were made of leather, and were clumsy and heavy compared with fashionable lady’s silk or kid shoes, but less so than the clogs (all wood or with leather uppers) that was likely worn by many country women for every day wear. 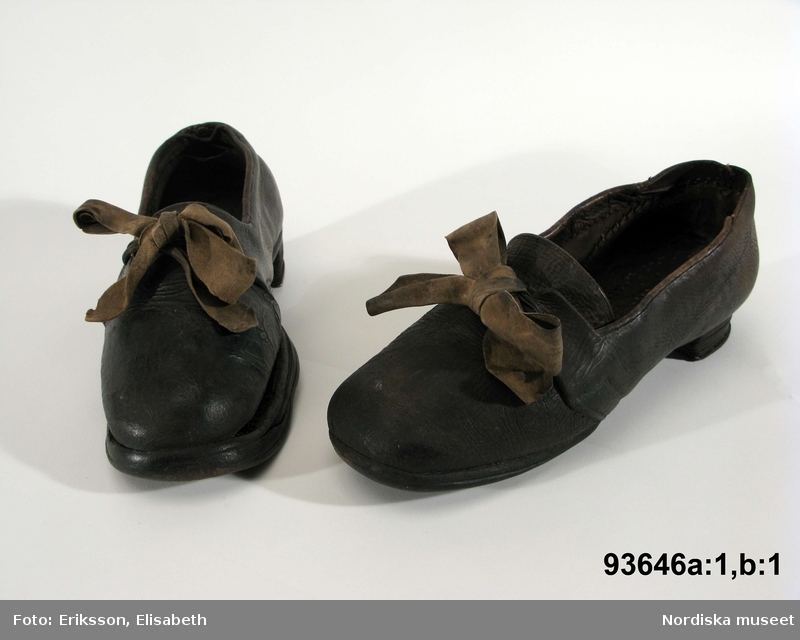 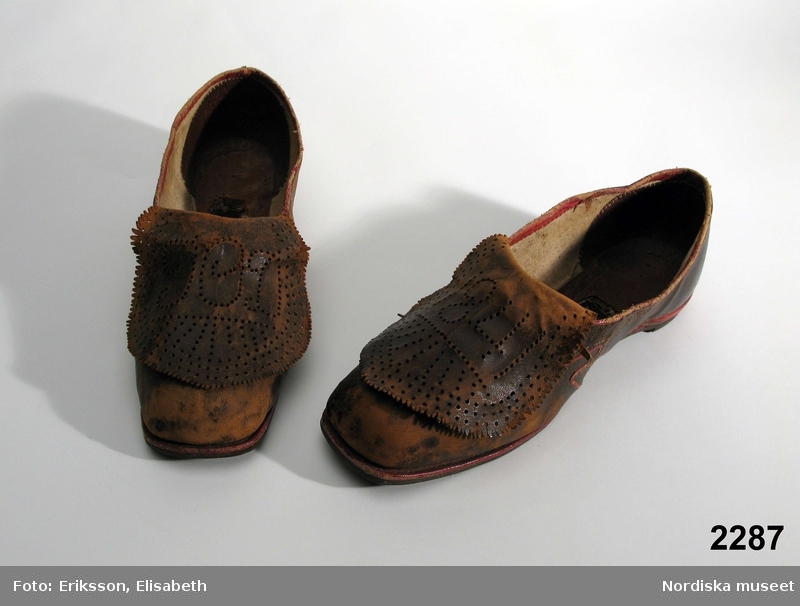 Woman’s plain clogs. Skåne.
Stockings (which I should really have mentioned in the underwear post) were home knitted in wool. I’m not sure what colours they would have had; with folk costumes women’s stockings had different colours in different locations. Scania is unusual in that women had black stockings; white and red seem to have been common in other places, at least for best. Natural greys, browns and whites might very likely have been most common for everyday all over Sweden, both in the country and the towns.