In a few weeks we’ll be attending our first event of the season. It’ll be a short one for us; we’ll just be there the one day. For that one day, I think what Tobias and I have will suffice (though we could both use a few items later), but B needs everything.

So far I’ve made him a little linen shirt, the sleeves hemmed so deep I’ll be able to let them down for him to wear it next year. Hopefully it’s wide enough in the body and sleeves to still fit him then, and since it’s now down to his feet, it should be a good length for walking by next summer. The shirt is made from far finer fabric than Tobias’ and my linens, since I don’t want it to scratch. It has a deep slit down the front, which will have to be closed in some way. I made the slit as I don’t want the shirt to slip down his shoulders, so they’ll be exposed to the sun or cold. B will need more shirts for our longer events in the summer, but for just one day, I hope it’ll be enough. We’ll see; if there’s time I might make another one just in case.

I’ve also made him a linen bib, made from coarser linen than the shirt. As it is cut down from an old head scarf, it’s worn quite soft. The bib is based on a couple of 16th century illustrations (waaaay to late for us, I know) and the fact that little B pukes. A lot. He’s also started to drool – we think he’s teething. I really need some protection for his wool cotes, so even if I haven’t seen any bibs in 14th century art, I will use them. I asked the other members of the group, and they seemed to agree it was one of those rare occasions when “it is likely they….” is acceptable as a reason for doing something. Usually we try to find at least two independent sources from the right year frame and geographical area before making anything. Anyway, I’ll have to make more bibs, one isn’t enough by far. 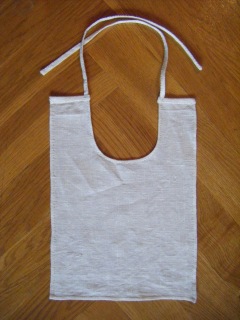 A couple of coifs have also been made, both from scraps of linen. The first one is pieced at the right side of the head, but I wasn’t happy with how it fit, so I made a new one, which I’m happier with.

The funny thing is, when researching children’s coifs, I couldn’t find a single picture from the 14th century, or even the 13th, and just one from the 15th.

French, ca 1475
I’m not saying there aren’t any just that I didn’t find them. If any of you know of any, please point me in the right direction! My research is probably not that thorough. Now, almost all the little children portrayed are shown indoors, and the one child I saw wearing a coif was playing outside – that might be a reason, but as I said, there are probably several pictures I haven’t seen. I think I’m so used to the idea that in the past almost everyone wore something on their heads most of the time, but in this case I couldn’t find much proof of it. But, as we’ll be outdoors for all of our events, B will have to have something on his head. A scaled down mans coif is plausible, I think.
And, lastly, I’ve made him a woollen cotte, cut down from an old skirt, and by necessity pieced in several places.

I did not want the neck opening to be too wide over the shoulders for the same reason I didn’t want the shirt to be, so I made a slit in front. It closes with three cloth buttons. 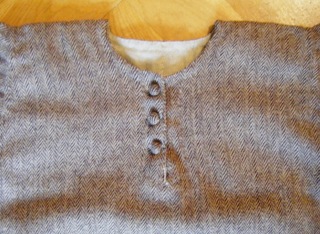 The cotte is loosely based on several illustrations and sculptures of older babies and toddlers in floor or ankle length cotes. 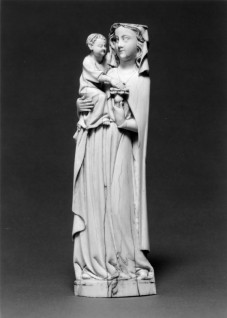 German, ca 1325-50
The buttoned neck I also found some proof of, but except in men’s wear, only on one child, a sculpture of Jesus from Spain.

Spanish, ca 1350-1400
As I don’t want B’s soft baby skin to itch from the slightly scratchy wool, I’ve lined the cotte around the neck and shoulders with worn, very soft linen. The rest of him should be protected by the linen shirt. As I don’t want the lining to show from the outside, it’s only attatched at the neck and armscye. 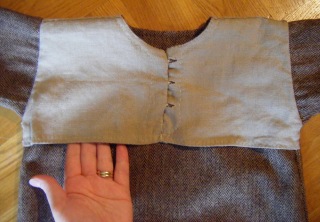 I’ve no idea if lining part of a garment like this is period or not, but in this case, I frankly don’t care. Living history is my and my husband’s hobby, and our child will not have to be uncomfortable because of it. I do however want his clothes to be or look as period correct as possible, so if I can cheat without it showing, great.

Speaking of period correctness – had we really lived in the Middle Ages, little B would still be in swaddling. (On a side note: how did babies have the opportunity to develop motor skills when swaddled? Sure, they were allowed some exercise when having nappies changed, and the arms were released after a couple of months, but still… B only turned around from tummy to back a few days ago, and he’s had over four months of freedom of arms and legs to develop strength. Hmm.) We’re already deviating from period correctness as we won’t let him suffer swaddling, unaccustomed to it as he is, but is putting him in toddler’s clothes a few months prematurely; sometimes, cheating is just the right thing to do.
Except more shirts and bibs, I plan to make him a pair of braies (or three) to cover his modern nappy, another cotte, a hood and a pair of needlebound socks. Good thing children’s clothes are small…