Still no baby in sight. It has its upsides though, waiting. I managed to finish a new wool winter skirt a few days ago. I’ll mostly just show you teaser pictures and hardly any descriptions of the different projects right now, as I want proper pictures taken post baby. 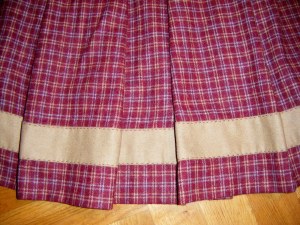 After finishing the skirt, I found there’s no point in me starting any new projects right now, as I might not have time to finish them in a foreseeable future, so this past week I’ve been working on a couple of things from my “in progress-box”. I finally finished my corded petticoat, inspired by Sarah Jane making one recently. It took me long enough, though of course, I’ve had a lot of other projects in between. I’ll post about this separately and more in detail later.

I also finished an apron, for modern use, that’s been cut out ready to be sewn for a year or so. I have a regrettable tendency to spill or spatter when cooking, and rather an apron getting the worst of it than my clothes. The fabric was originally a couple of charity shop-bought cotton curtains, rather small but with deep hems and I made the most of them, so if you look closely, you can see the old stitch marks. Not that it matters in a working apron. As I wear skirts or dresses most of the time (when I’m not having a very lazy stay-at-home day and wear old sweat pants) I like my aprons slightly flared and long enough to cover them. 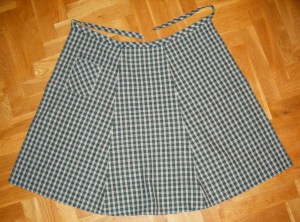 I cut the pocket and waistband/ties on the bias, for visual interest. To prevent the sewing thread in the ties breaking when the apron is being used, I had to keep them well stretched when sewing them, so the seams look a bit loose when not under stress. I was a bit unsure about having ties cut on the bias, but I’ll think it’ll work ok.

I made a decision recently to try and make peace with my sewing machine, and have since tried to sew more things on it rather than by hand than I did before. Thus, the apron is mostly machine sewn. I must say it is pleasant to be able to finish things so quickly, provided the machine behaves itself properly, and I think I’ll be able to learn not to mind the more clumsy hemming (on some things) that is one of the draw backs. I might even become good at sewing on the machine… I’ll try and reserve hand sewing to historical clothes that wouldn’t look right without it and other things that really does look better hand sewn. I believe my elderly self will thank me for it in future. Besides, depending on baby’s personality, I might not have very much time for sewing for a while, and must make as good a use of what time there is as possible. That being said, I’m spending the evening working on my regency stays – by hand.