Last time I mentioned I’d finished my winter coat, and today, I finally got some pictures of it.

The coat was made using herringbone wool in grey and off white, which I had in my stash. I didn’t have very much of it, just 150×180 cm (about 59x71”), which presented a problem. I like my coats to be long (usually longer than this), as I get cold easily, and prefer them to be wide at the hem as I wear skirts or dresses with a bit of width most of the time. The answer was to use a different fabric for the details (collar, placket, belt and sleeve ornaments). This fabric, gray wool, was also one I had in my stash, and as with the herringbone fabric, there was just enough to squeeze the pieces I wanted from it. In fact, I had so little of either fabric that I had to use a third woollen fabric for the facing on the front and the collar. It took quite some time to work out how to make a coat out of so little fabric, but I’m pretty pleased with how it turned out. I would have preferred a bit more width at the hem, but beggars cannot be choosers….

My poor fingers are so swollen that I can’t wear my rings…
they have to be worn on a chain round my neck.
To make ultimate use of the main fabric, I cut it in as few pieces I could, which meant only two in front, two in back. From the little fabric left, I made a pleated gusset, inserted in the centre back from the waist down, to add a tiny bit of width. It’s very slim, which is my main regret with the coat, (so I won’t post a picture of it, though you can see a hint of it in the side shot below) but I really didn’t have any more fabric.

As I’m very pregnant right now, I didn’t make any darts at the waist, just from the shoulders. Instead I made a sort of belt, that can be adjusted to my hopefully soon slimmer figure, by moving the buttons in front. Hopefully it’ll work as planned, so I won’t have to look like a tent the whole winter.

The buttons in front are not functional, as I couldn’t think of a clever way to make them sit right on the contrasting placket while using buttonholes, and it would look silly if they were off centre. Instead I used rather big hooks and sewn bars, which so far have worked very well. The buttons just add visual interest. As you see, the lining is a vivid pink, just for fun. 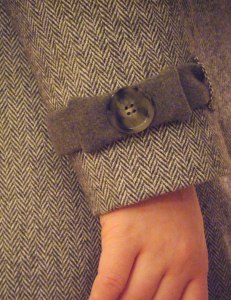 More visual interest is found at the sleeves, where a band from the grey wool is decorated with a self fabric sewn bow and a button.
The other day a lady came up to me and asked where I’d bought my coat, which was flattering. She wanted one for her niece, who is also pregnant, and is having difficulty finding a coat that will close.
On Saturday the baby is due, but I doubt he or she will arrive in time, as I and all my siblings were more or less late. I’ll just have to practice patience a bit longer, and hope to scrape up enough energy to finish a skirt I’m working on, and looking forward to wearing when I have the resemblance of a waist again.