One was fixing a constant (and free) water supply to the garden. My Dad had asked the owner of the woods just behind their house if he could put a hose in the tiny brook that runs through it, and it was fine. The hose runs from the brook, through the woods and into the garden, filling up big water tanks there. It’s a very good complement to the collected rain water.

Not to make the hose too obvious to idle passers by (in Sweden you’re permitted by law to walk anywhere you want, and pitch a tent for one night, even if the land belongs to someone else, as long as you don’t intrude on privacy, like getting too close to some ones house, or destroy anything, like cutting down living trees or letting livestock escape), we covered it with stones in the brook, and in the following days my siblings will help with putting it just under the undergrowth of the forest floor. Looks much better as well, who’d like a random hose running through the woods. The first day we worked together with Dad and little sister I, but yesterday Tobias and I worked by ourselves. While splashing around in the shallow water I caught a toad.

I caught a frog too, after a wild and dangerous chase at a very steep and slippery part of the brook. I didn’t get a picture of it though, it was much quicker than the toad, and jumped, slithered and swam to freedom while I tried to get my camera out.

In the garden, my parents have many places where they grow vegetables, fruits, berries, potatoes, etc. Several of them are neatly hedged in with wattle-work. A new fence was planned, and Tobias and I (who want that kind of fences in our future garden) were glad to try our skills at it. It was so much fun! 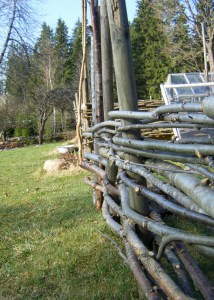 My Mum wanted an arch between two of the kitchen gardens, and on the evening of Good Friday I assisted Tobias and my brother A in making one. The plan is that it’ll be a base for hops to climb, and I think it’ll look very pretty.

After two days of working in the sun after being mostly indoors for the past half year, I now have the nice beginning of a farmers tan (which is usually the only kind of tan I ever get, as I normally stay out of the sun as much as I can). I so long for a house in the country with a big garden, where I can keep chickens and have a lot of room to grow things! It’ll have to wait some years though. But sometime….