My folk costume from the south-west corner (more specifically, Oxie, Vemmenhögs, Skytts och Bara härader), of the county Skåne (Scania) in the very south of Sweden, is, after having working on it for the past year or so, now almost completed – enough for it to be worn anyway. I will now show it, layer by layer. This is what an unmarried farmer’s daughter of rather comfortable means might have worn to church and parties in about 1820-50. I’m afraid there’re no close ups, since the batteries in my camera died, and some of the pictures aren’t very good for the same reason. I’ve linked to previous posts on the different garments, in case anyone would like to go back and learn more about them.

First it’s the sleeveless shift, hankasärk, made from half bleached linen.

Then the opplöt is put on, a blouse made from fine, bleached linen, with a collar of fine cotton voile. Black wool stockings are worn. I haven’t knitted a period pair yet, so I’ll have to make do with a cotton blend for now – they won’t show that much under my long skirts anyway, and at least the colour is right. Black is a rather unusual colour in Swedish women’s folk costume stockings, in most other places they’re white or red.

The hair is braided and wound round the head, as seen in this painting from Torna härad. Or maybe you can’t see, the picture being rather small… 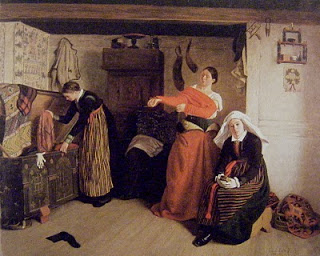 The painting is not from my area (in Skåne there where 23 areas, called härader, with slight or pronounced differences in dress), but borders to it, so some elements of dress are the same (notice the red spedetröja the girl in the middle is putting on), while others differ (like the shape of the collars, and the married woman’s white headdress). I’ve woven the wool ribbons in the hair myself.

After the opplöt, the knitted, woollen spedetröja, trimmed with silk, is put on.

The silk bodice, liv – the roll at the bottom of it looks quite ridiculous, but that’s what they looked like. I must confess I’m thinking of making it smaller though – after all, this costume is not to be worn in living history settings, but on festive occasions in modern day society, so even if my aim is to make it as right as possible, I wouldn’t feel too guilty with this compromise. As long as its purpose, to support the skirts and prevent them slipping, is there, I’m satisfied. The liv is laced with a steel chain at the moment, but it will be replaced with a silver one eventually. Btw, I found buckles almost identical to mine in the database of Nordiska Museet, which made me quite happy.

The heavy, wool skirt is next. Notice the look of “a comfortable size” the roll of the bodice gives the hips. This would be even more pronounced by the multiple layers of wool skirts, that was the custom back then. Skåne was comparatively rich, having good farmland, and everyone wanted to show of their wealth, not only by silver and as fine materials as they where allowed, but also by looking well fed. Not a look we tend to go for today, is it? The skirt has a tuck just below knee level, to help hold out the skirts. A silk ribbon with a pattern of woven-in flowers was often sewn on between the tuck and hem, but I have yet to find one in real silk.

The woollen apron, with its woven cotton waistband/ties. It ties a little off centre, with a bow. An apron was always worn, even to church, by the farming community; no woman would be seen without it. On the head is a cotton kerchief – this kind could be worn by married and unmarried women alike. 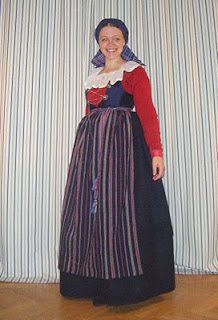 The starched, white headdress was worn by married women alone, as a symbol of their social status. A married woman would not be seen outside the immediate family without a kerchief of some sort on her head. Today, most people who wear folk costumes in Sweden omit the hats and headdresses, thinking they look silly. I can agree, but think it depends on the setting. I might do both, wear it over my braided, tied-up hair sometimes, and at other times wear my hair uncovered in the styles I usually wear, all according to the occasion. Like I said before, the costume is to be worn to parties and such in this time and age, so making some exceptions and adaptions is all right in my mind. I will for example wear make up, though I will probably not wear modern jewellery.

And that’s as far as I’ve come. I will, when the money, wish and time is there, add spedetröjor, liv and skirts in other colours, aprons in different patterns and materials, and several opplöts, so I can mix and match according to my mood. When it looks like I’m likely to marry, I’ll start to embroider the white headdress. But the costume is perfectly appropriate to wear as it is now. Yay!